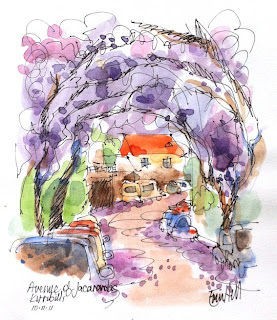 When Jen referred me to a sketch on Urban Sketchers of Jacarandas, I thought I should update my postings here with my own 'speed sketch' of Jacarandas.

I took the class to an avenue in Kirribilli which becomes a glorious display of purple when the trees are in full bloom. You also inhale the gentle perfume in the air, and end up with bell-like flowers all over you as they float down like lavender snow.

I get less time to sketch when with a class of course, but did this quick one so that we could try colour application techniques later.

During the week,  I'd given my best purple recipe - Permanent Rose & Cerulean, so when we settled for lunch at 'Freckleface' cafe, everyone mixed their own version of the colour , and between mouthfuls of lunch, much paint was applied.

We had a lot of laughs as occasionally a brush would end up in the drinking water or coffee instead of the vegemite jar of water, as you do when you're not looking.
It was just such a lovely setting to sketch in, and everyone went home with sketches they felt captured their day very happily.