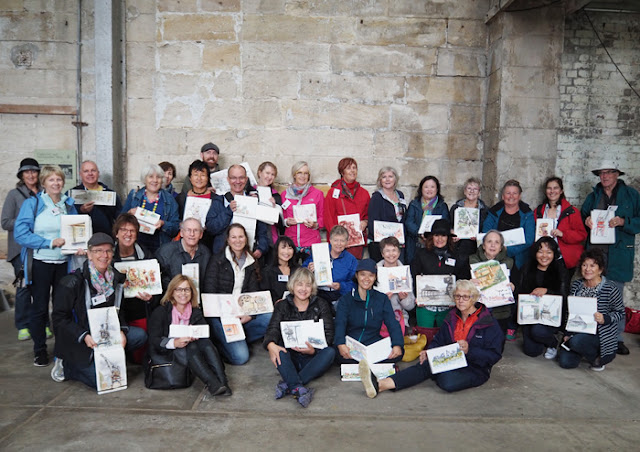 This weekend, Sydney sketchers were excited to host sketchers from around Australia in our wonderful city for a weekend of sketching. We took advantage of the extra day provided by the ANZAC Day public holiday to visit a real variety of locations from the beach , to convict sites and
21st century architecture, and of course there was plenty of chatting, eating, and getting to know a whole lot of new friends, some of whom we’ve connected with on Facebook but never got to meet before, living in this vast country! We had over 50 participants, 21 of whom came from outside Sydney. The furthest ones came from Cairns  and Adelaide, and we also had sketchers from Melbourne, Brisbane, Canberra  and Wollongong.

The event began on Friday with sketching at Manly and around The Rocks.  We avoided most of the rain, before ending up in the Orient Hotel for Drink and Draw. It was a great way to break the ice and form new friendships, and the happy mood throughout the evening ensured we were going to have a great weekend! 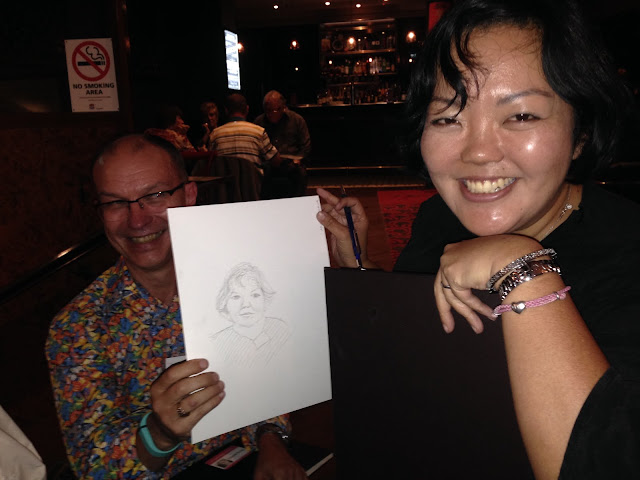 On Saturday we spent the whole day at Cockatoo Island,  a UNESCO World Heritage Site in Sydney Harbour with a fascinating convict and ship building past. It’s also the site of the current Biennale, so we were spoiled for choice for things to draw! We dodged the rain and rescued a few umbrellas while the rain created its own magic on our work! But it just gave us more practice with wet in wet washes , and proved again how hardy Urban Sketchers are! 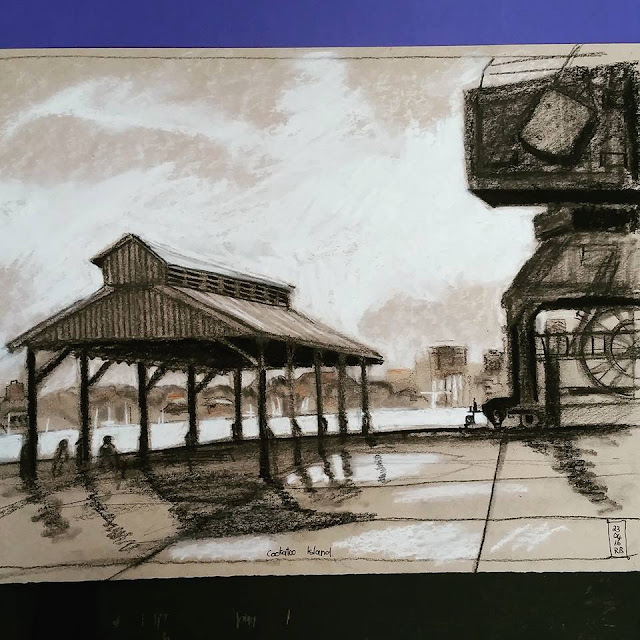 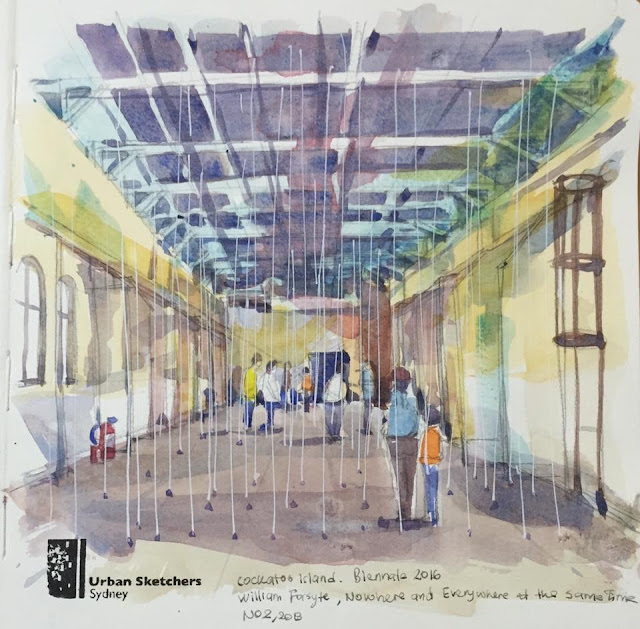 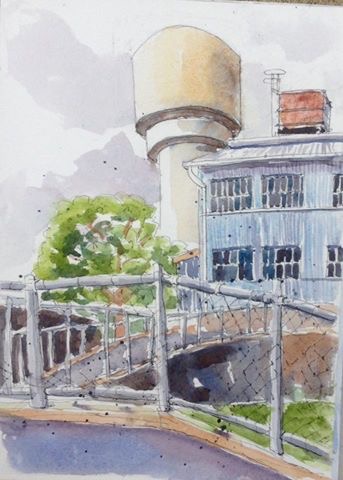 On Sunday  we started out at Hyde Park Barracks and found it hard to tear ourselves away when it was time to go for Yum Cha, after which there was more sketching in Chinatown, and what a terrific
range of techniques was used. 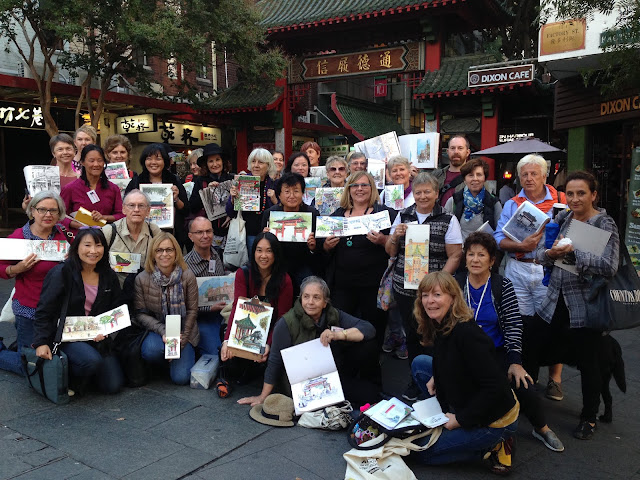 On Monday we tackled a very 21st century building. Some had to leave to go back home to far flung places but we were left with a  keen group who produced some outstanding portrayals of the really-difficult -to-draw Frank Gehry building, fondly known as "the squashed paper bag building". After Alf was able to rescue his very much loved paint brush from a building site which had swallowed it up, we concluded with lunch as we began to wind down! 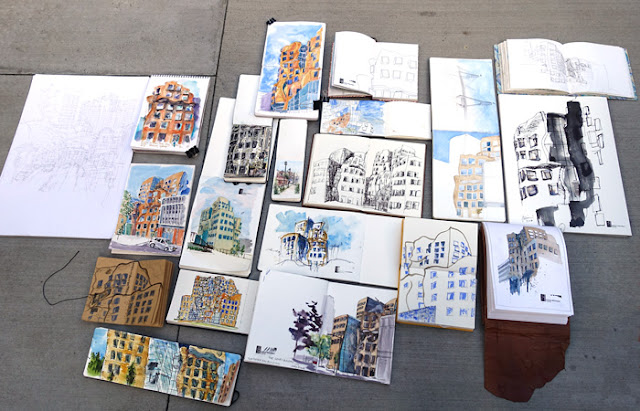 There was a real spirit of fun and sharing over the weekend, and plain enjoyment of sketching in each other’s company. It was such a pleasure to meet our interstate visitors and  know it will contribute to strengthening even further the links between sketchers across Australia.

A City Slicker’s Visit to the Australian Outback

I’m about to leave home and visit another far-flung part of Australia – Broome in Western Australia - and it has made me look back at my journal from my first visit to the Outback at the end of last year, when I had the chance to visit Broken Hill, an isolated mining city in the far west of New South Wales. It’s over 1100 km from Sydney and surrounded by semi-desert, so I was excited by the chance to see for the first time the colours of the outback. It was interesting preparing my palette for the journey. I bought a few new watercolour pencils and topped up with Daniel Smith Transparent Red Oxide, which is a fabulous colour that makes everything better! 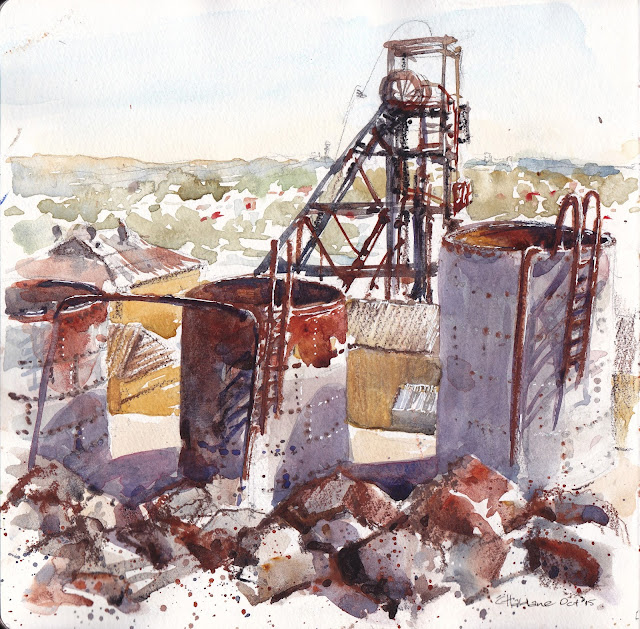 Broken Hill once produced 1/3 of the world’s silver. In the early 1900s over 8000 men worked its mines and the remnants of its mining history are everywhere, like the old BHP poppet head on the Line of Lode that looms over the city.

But there is so much more to see than mines. A special experience was to go out to the Living Desert Reserve at sunset to view the stone sculptures. This Aztec sun god with its keyhole seems to be the favourite. It’s a place of utter tranquility, just entrancing as the sun sets and casts a vibrant orange glow, which gradually turns to grey-mauve as it sinks below the horizon. It was one of the most special places I’ve ever painted! And I was glad to have my Schminke transparent orange with me! 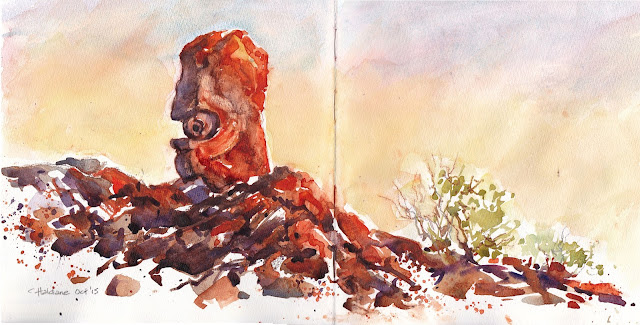 Another special experience was visiting Kinchega wool sheds about 100 km out of Broken Hill. Built in 1875, they’re so remote and a real step back into Australia’s pastoral heritage. In 97 years of operation 6 million sheep were shorn here. If the boards could talk! You can’t help but marvel at the tenacity of those early settlers. How did they survive the remoteness. We were there on a 38 degree day but at least we had an air-conditioned car to travel in 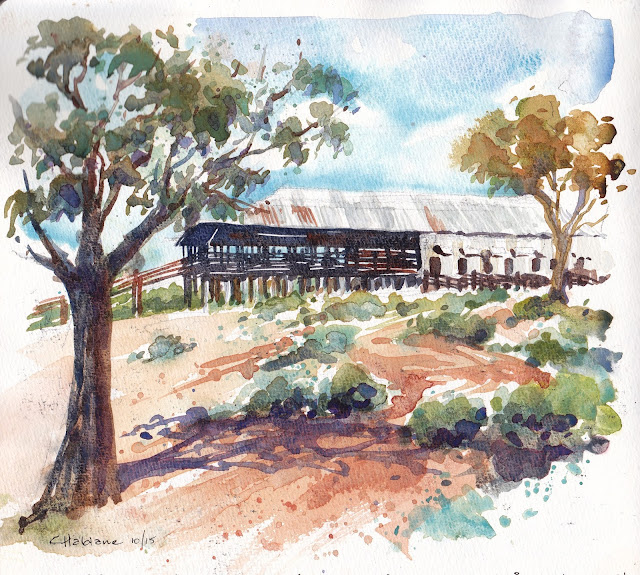 We also stopped where explorers Burke and Wills’ expedition camped on this river bank on their quest to cross Australia from Melbourne in the south to the Gulf of Carpentaria in the north, as the signage on the tree indicates. Water levels are currently very low and Broken Hill is facing another water crisis as Menindee Lakes dry up. The searing heat of the day came through in the parched colours.

When full the Menindee Lakes hold more than three times the size of Sydney Harbour, but the locals told us that currently they’re down to 5% capacity. The dead trees in the Lakes are a well known feature.

On my last morning I couldn’t resist going to Junction Mine, which I’d spied the day before on the way to Kinchega. I just loved its strong lines and shapes, along with the rust. I drew in the early morning before breakfast because the forecast was for another stinking hot day. 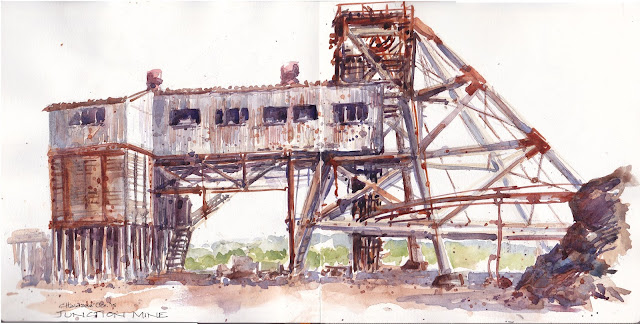 Looking back through my sketchbook I notice how much brown I used on this trip, not generally a favourite of mine, and it was interesting catching the train back on the long journey home, watching the greens gradually appear and the landscape become more lush as we neared the coast. It was a wonderful experience and I look forward to more trips to the outback. It made me feel proud to be an Aussie!
Posted by Chris Haldane at 9:55 PM