I had already completed half of my personal worldwide sketchcrawl by the time I arrived in Paris from the US (see Part 1: http://australia.urbansketchers.org/2014/04/a-personal-worldwide-sketchcrawl-part-1.html).  It was early on a Sunday morning and, despite the jet lag, I had an afternoon meeting with some Parisian urban sketchers to look forward to (thanks again Liz Steel for the intro).

It had been the Paris Drawing Week (la semaine du dessin) and amongst the activities a drawing exhibition of classical “masters” was being held in the Palais Brongniart (former stock exchange). So a group of sketchers decided to meet at a cafe beside the exhibition building and avoid the entrance fee by sketching the building instead, and/or the environs.

As it happened we never quite left the cafe. We chatted, drew what was in view, including each other, and enjoyed the afternoon. It was a perfect unwind and introduction to a new time zone for me. And great to meet such talented and interesting people.

Here is my drawing of “not the Palais Brongniart” (it was behind me from where I sat – although the statue is just behind the building in question). :-) 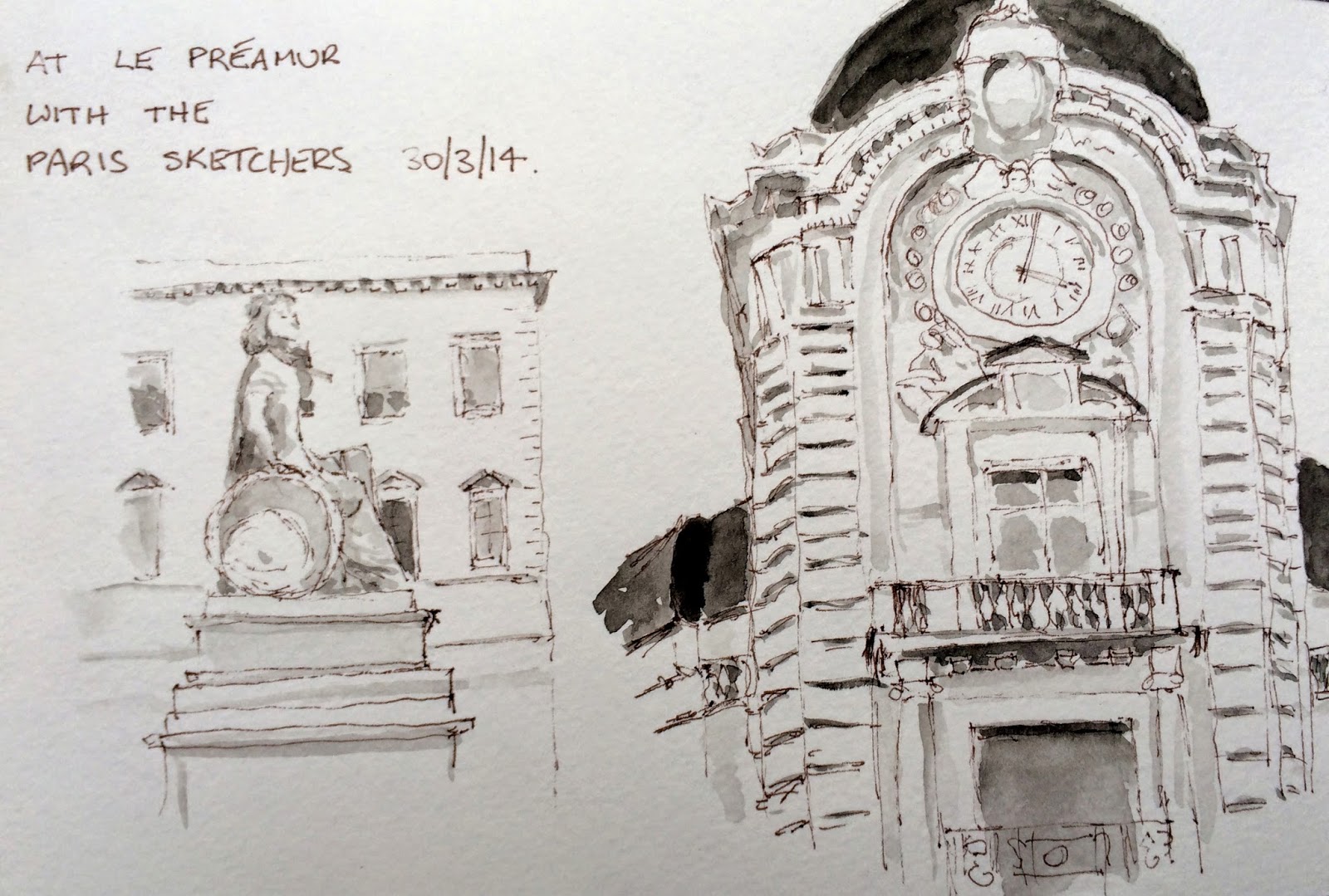 (Confession: I mis-spelt the name of the cafe, it is Le préaumur).

And here is proof that I was there: Marion Rivolier's lovely sketch of some of the group in the cafe:

Then a week of work, including quite a few trips on the suburban rail line (RER) where I could practice sketching my fellow passengers (especially helpful when they were asleep).

And I still had another Saturday in Paris before heading off to Germany. It was a perfect Saturday afternoon (that had been predicted to be rainy) when we met in Le Musee de la chasse et de la nature (museum of the hunt and of nature). This former private home and collection of guns, hunting trophies, taxidermy, art and kinda weird stuff provides a fascinating range of opportunities to sketch. I started with the large stuffed polar bear (in ink, because the attendant was insistent that no paint was allowed in the museum - and any pencil shavings must not be dropped on the ground!): Then I settled into a comfy chair alongside the grizzly bear. As it happened there was an “artist in residence” (literally: http://culturebox.francetvinfo.fr/poincheval-lhomme-qui-vit-dans-lours-au-musee-de-la-chasse-152777) inside the grizzly, and the kids were having conversations with him. This is the view from the other side. I had no idea the artist was actually inside! 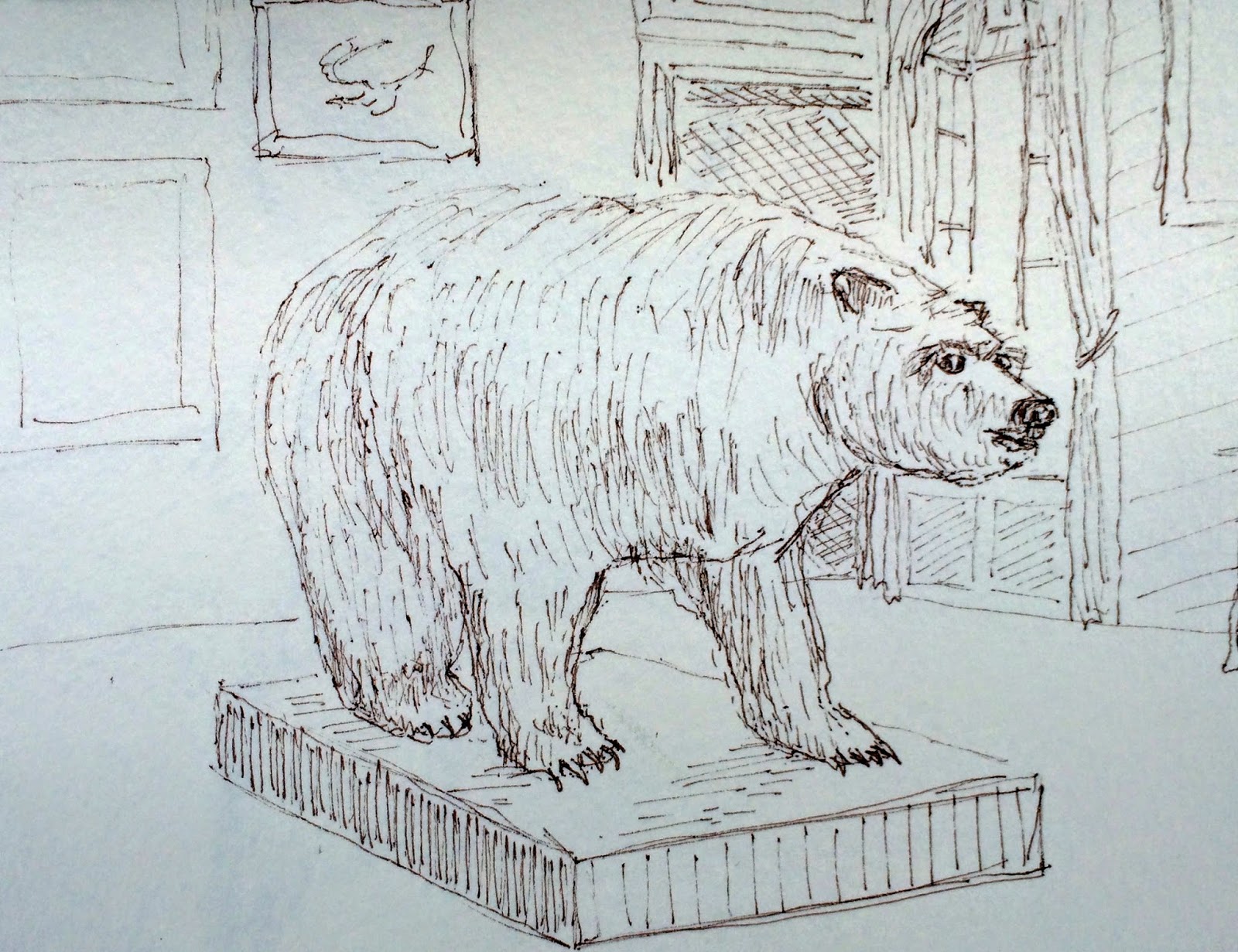 When the museum closed we all got together for a drink at a nearby cafe. This time a) Marion was travelling so was not available to sketch the group and b) I remembered my camera, so here we all are: 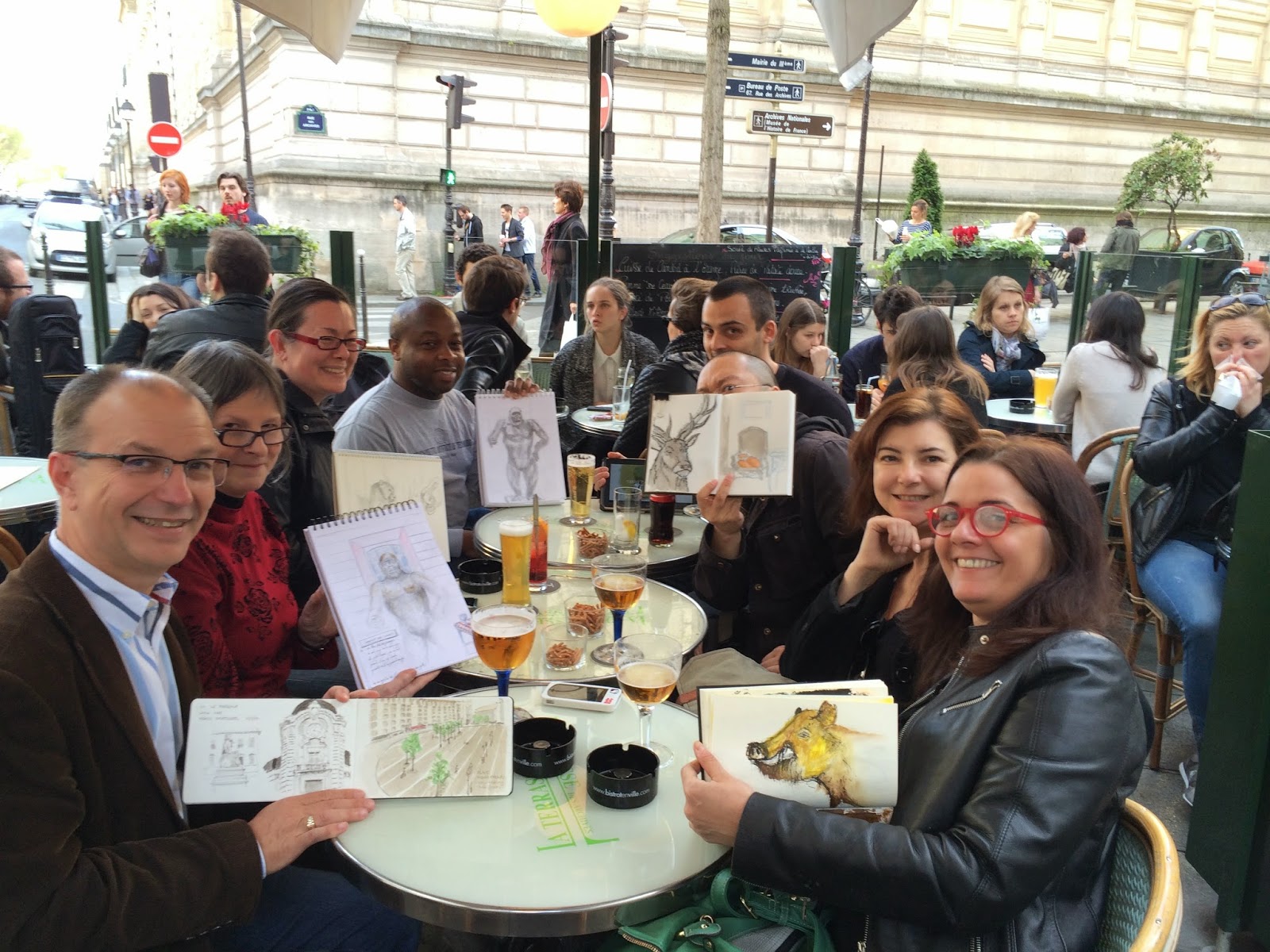 And then a bonus activity, sketching a live model at the classic art school, La Grande Chaumiere. It was an "open night" before start of the next semester so a few of us travelled to the left bank for the free class. The model moved constantly in response to poetry and music that was being simultaneously performed. Very tricky to sketch fast enough, and well beyond my skill – for the record here is a selection of what I captured: 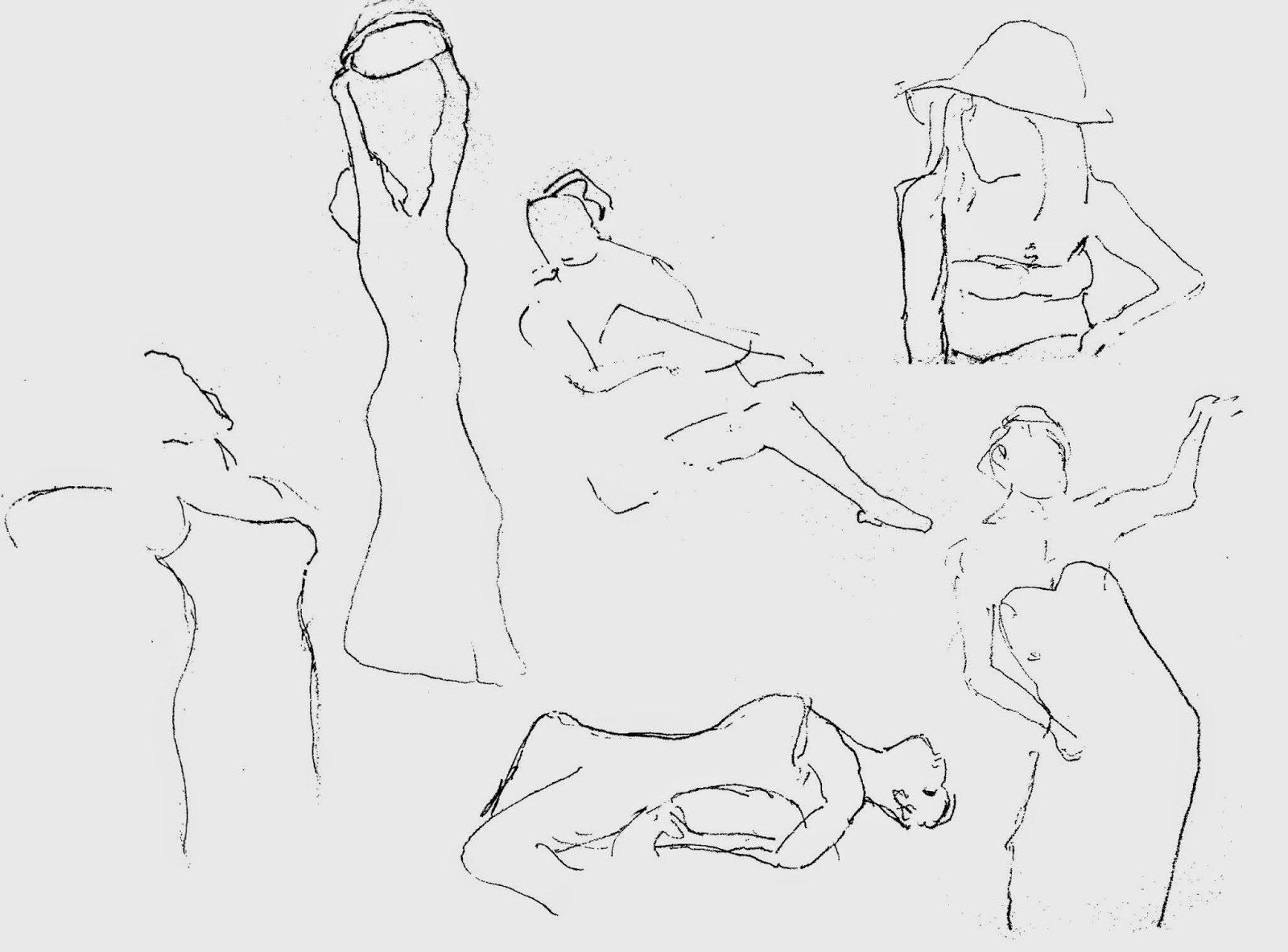 And that was the end of my Paris sketching. I took a train to Germany the next day, and worked through until my flight home - and a familiar view of the back of an airplane seat. 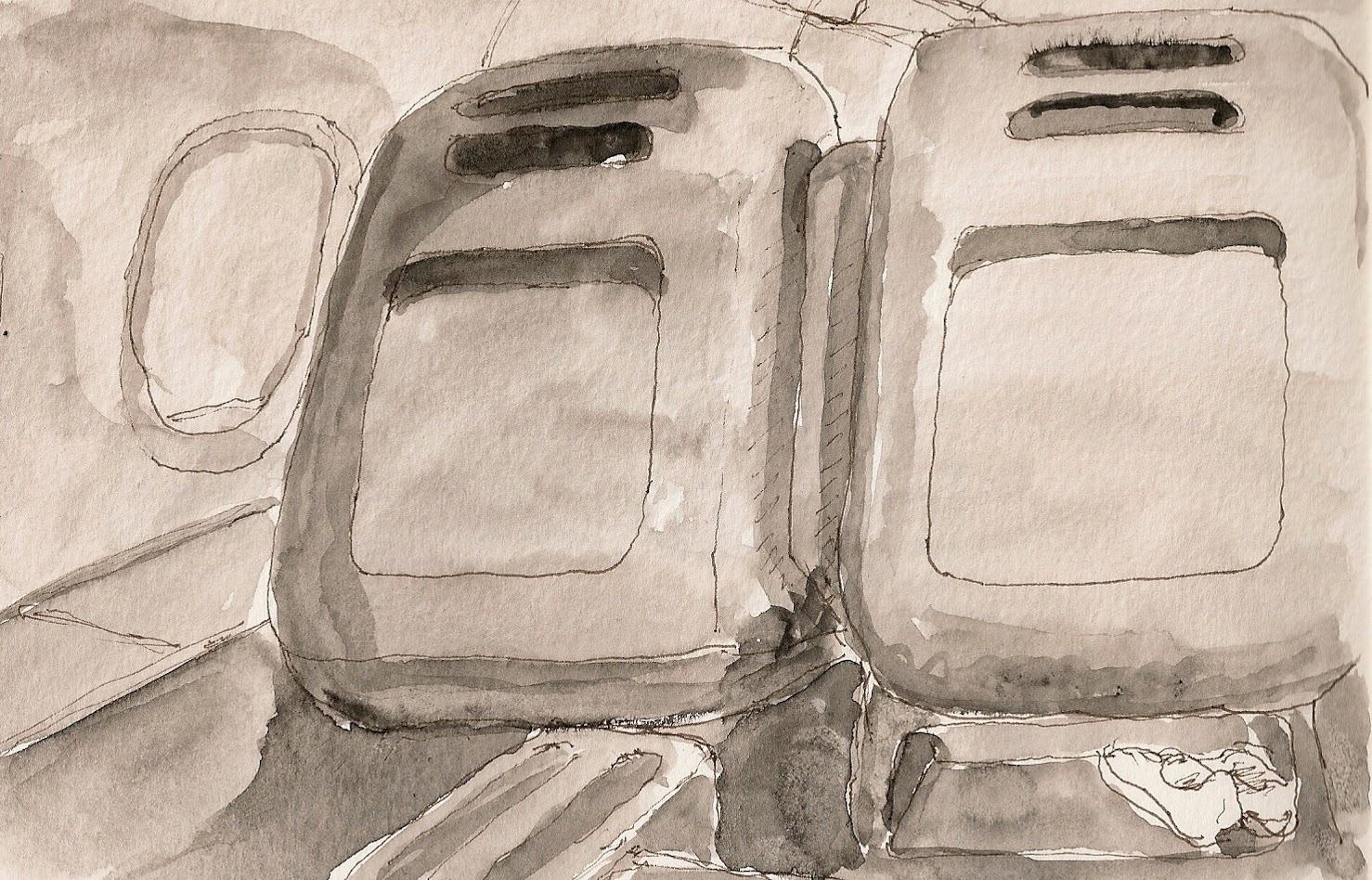 No chances to sketch in Germany this time - but I will be back in Munich in May, and I see they have an active USk group...