Since the beginning of 2014, I’ve been really interested in documenting the huge 22ha Barangaroo development which is changing the face of Sydney's CBD. It is named after an important indigenous woman in the early days of colonial NSW who was also the wife of Bennelong, after whom the site of the Sydney Opera House is named.

In my first sketch of International Towers Sydney in February 2014, I tried to capture the noise and energy of the site with its Lend Lease cranes. 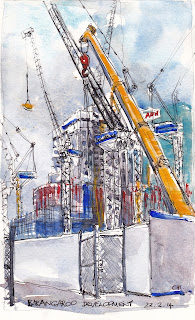 In August  last year,  Barangaroo South was a hive of activity, yet these massive pieces of machinery seemed so graceful and birdlike, I called my sketches “The Dance of the Cranes”. 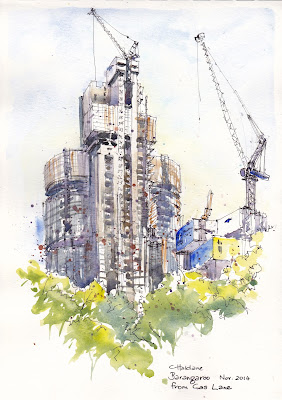 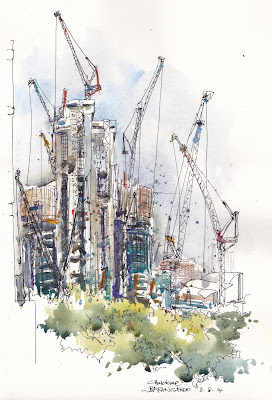 In November 2014,  I sat  in the park in Millers Point which is now closed to the public, which gave me a good view of Central Barangaroo and all the construction paraphernalia. Tower 2 was up to the  42nd floor. 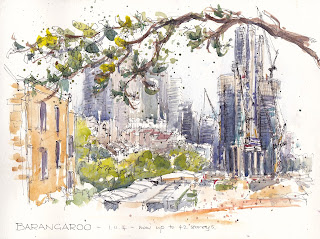 On Australia Day 2015 I drew from Darling Harbour with the Harbour Ballroom boat in the foreground.  I just love the logos  stenciled on the towers, which began as a way to track progress but have become a public calendar of significant events. Because Australia Day falls on 26 January, the corresponding floor of Tower 3 was plastered with a giant Australian and Aboriginal flag to celebrate our national day. 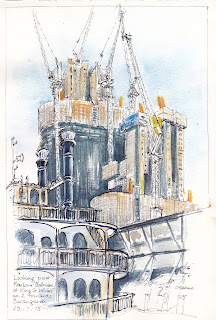 Feb 2015 - Drawing Tower 1 from Napoleon St while the cranes and machinery hammered out their music around me. The triangular forms of the cranes really appealed to me. Note the Australia Day flags and two stencils painted on the tower to commemorate the 100th centenary of the ANZAC landing at Gallipoli . Another one reading “63 not out” marks the 13th floor being constructed when cricketer Phil Hughes died when he was struck on the head by a cricket ball at the Sydney Cricket Ground. 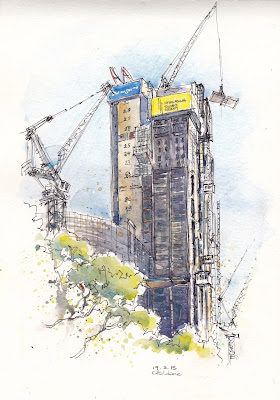 Drawn recently from the Maritime Museum.  There are so many changes since i first started to draw this site in early 2014, but the cranes continue to intrigue me. It’s interesting to see how the glass reflects the surrounding building colours now that it's in place. As the sun was beginning to set, the red floating lighthouse at the Maritime Museum provided such a lovely contrast in colour. 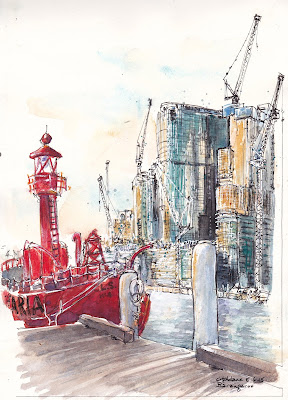 Last weekend I went back to where I drew from last November, to see the changes to Central Barangaroo. The gardens on Barangaroo Point are well established now and in the foreground there is row on row of individually crafted sandstone blocks, 10 000 in all, and all quarried onsite.!  Nawi Cove has also been created between Barangaroo Point Reserve and Central Barangaroo. The waterfront promenade has just been named  Wulugul Walk. Wulugul is  Aboriginal for kingfish, which have a golden band along their blue-green skin, similar to the foreshore walk’s golden sandstone lining the blue of the harbour. 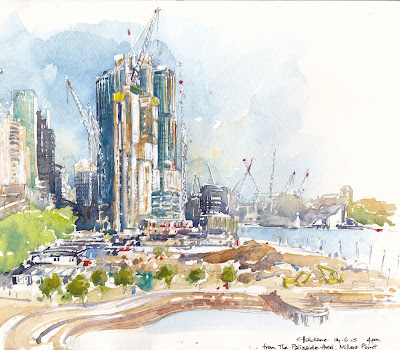 It’s exciting watching the energy and scope of this development and it will certainly be high on the list of places to see for visitors to Sydney in the future! I look forward to documenting more of the site as various sections are opened to the public.