A step back in time on the road to Canberrra

I recently stopped off at one of my favourite places, Marulan, a little village off the main highway between Sydney and Canberra. It has some interesting history, including bushrangers holding up traffic travelling north to Sydney from the Southern goldfields. Each time I stop there I take the chance to draw some of the historic buildings on its main street, adding to my Marulan set in an 8 x 5” Moleskine. 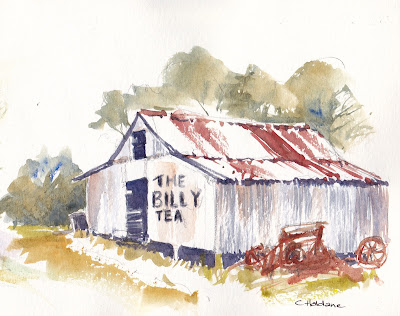 I can never resist a tin shed … something about the rust? Certainly they have character! And I love the old Billy Tea signage on it. 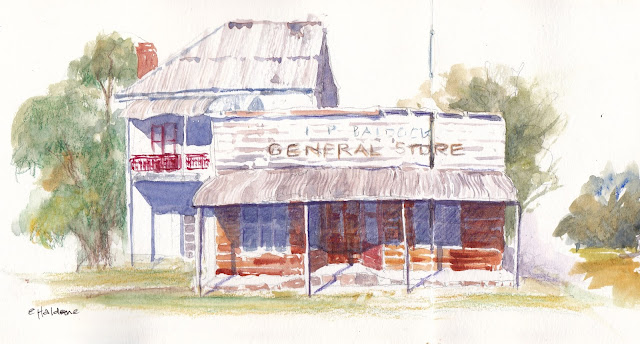 The buildings that make up Baldock's general store are classic Australian style with the galvanised shed alongside the shop and residence. It was built in the 1870s with a well at the back that was one of only three that were Marulan’s main water supply in those days.

The Marulan Butchery, built in 1878, has been a butcher’s shop ever since! At one time it was Feltham’s Butchery and apparently Granny Feltham was still a good butcher at age 93!
The Victorian Stone Shop beside it was a grocery store, with a blacksmith’s at the back. The front gable has a window used when heavy stores were winched to the loft from the horse drawn wagon below. I read that at one time there was even a skating rink at the rear of the shop!

There are still more buildings for me to draw next time I pass through … a good excuse to go on a road trip again!

Posted by Chris Haldane at 8:03 PM