This page is about my experiences in the last month. I live in Sydney I had the opportunity to connect with urban sketchers in Brisbane, Newcastle  and then Melbourne in the Australian Christmas holiday break. In each city I sketched with the locals (and some other Sydney travellers). I had met some of them previously but also met new people. I initially contacted them online via facebook or their blogs and let them know that I was visiting and the dates and they arranged place to meet and sketch. Often an event was organised around my visiting dates !

This is a bit of a long post with my sketches and a some notes. I filled many more pages of my sketchbook in Melbourne, but they are not Urban Sketches. They will all get scanned and put on my flickr page. I will also write a separate Melbourne blogpost on my site with those adventures soon.

Have watercolour pencils , will travel !

A day in Brisbane in early January included a group of JJ, Asuka, Leeanne, Geoff (who sketched with us in Sydney recently) and Chris (also from Sydney) .

We met for coffee and quickly moved into discussion of art materials and looking through each others sketchbooks. It is so different to see the sketchbooks in reality and turn the pages. JJ and I had a discussion on drawing feathers.

We sketched at Southbank in the shade of the trees looking over the river to the city. It was very hot and we were outside in the morning and headed for airconditioning from lunch onwards. 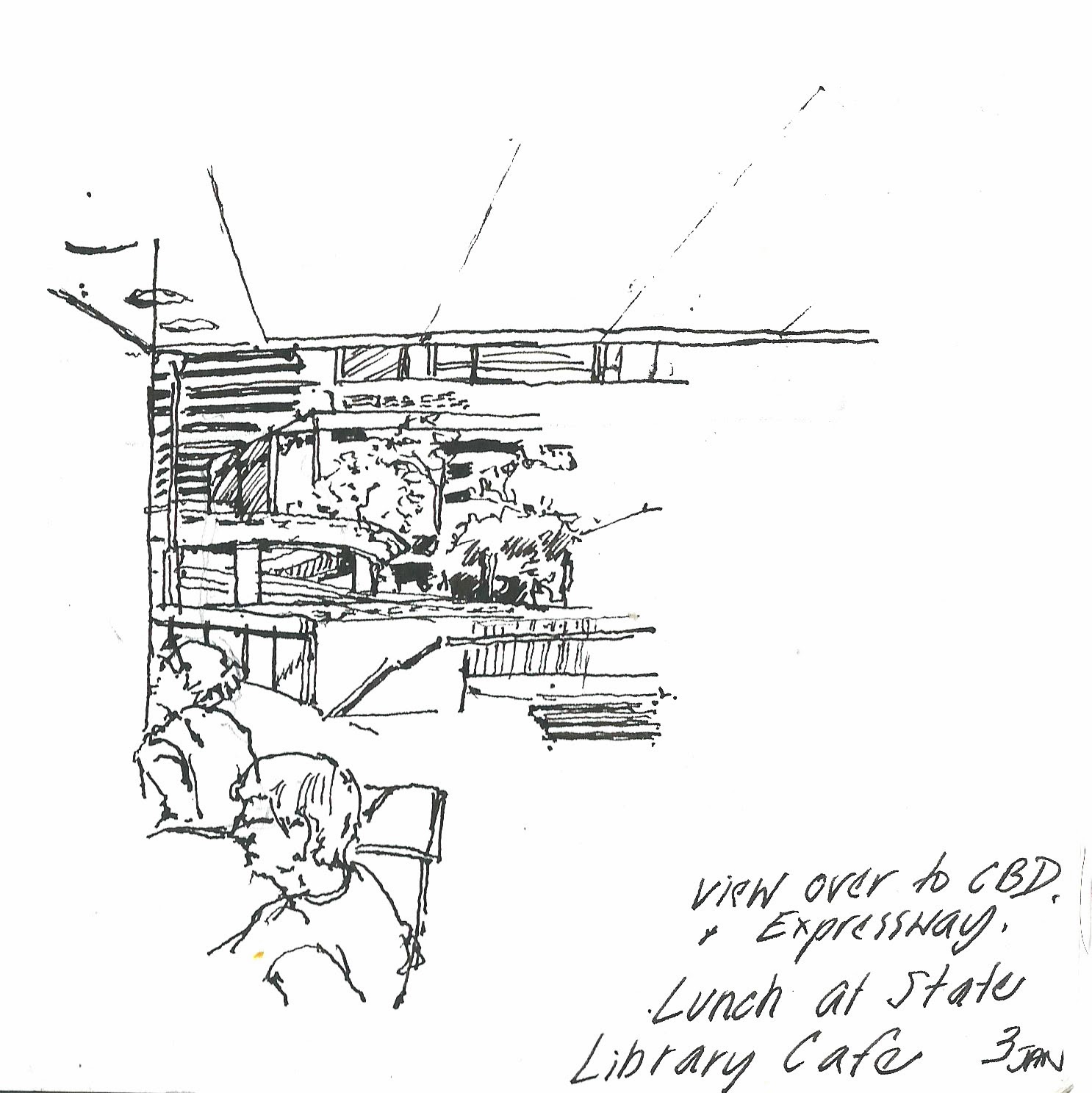 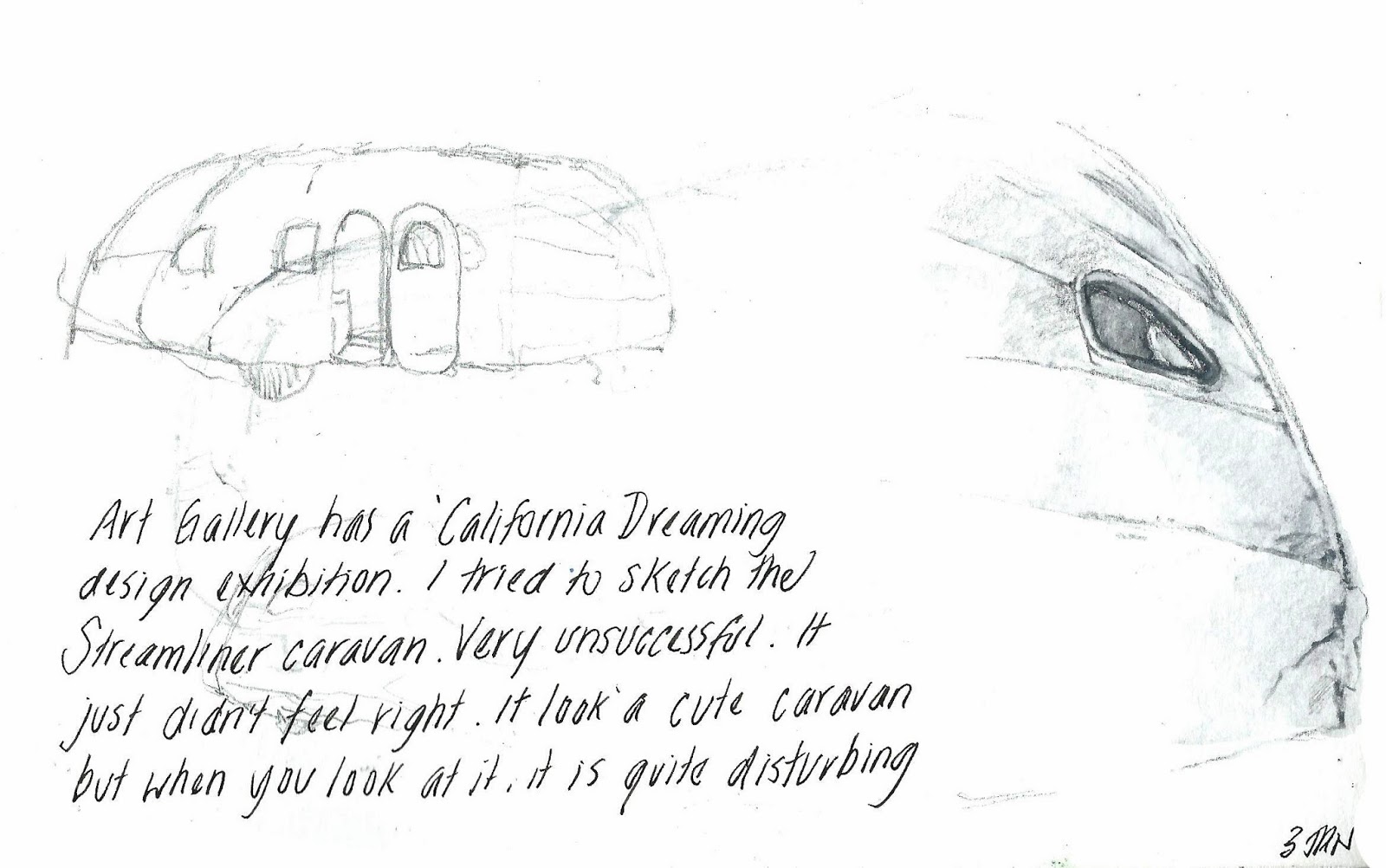 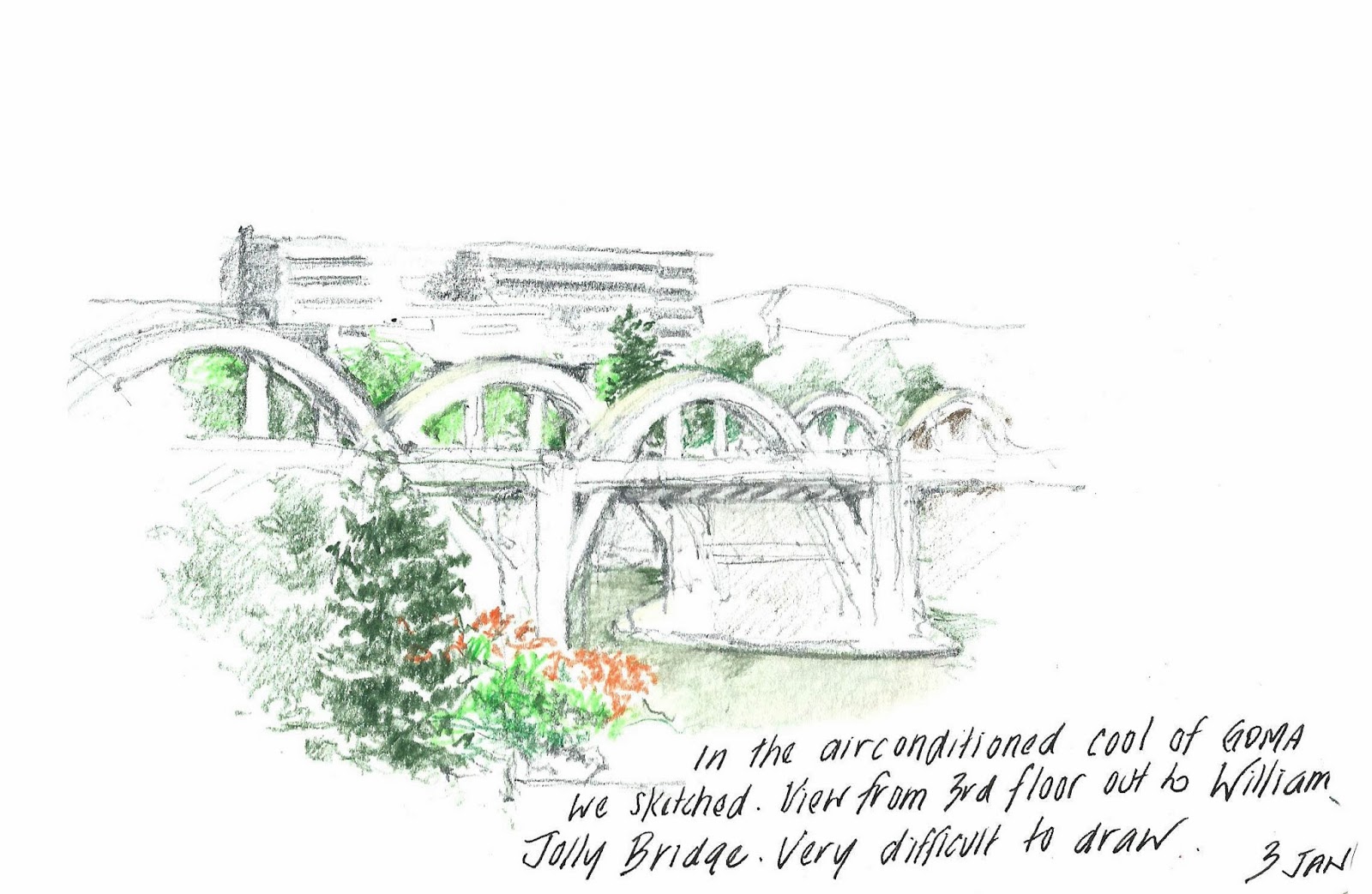 I revisited the same area later in the week to draw some more. 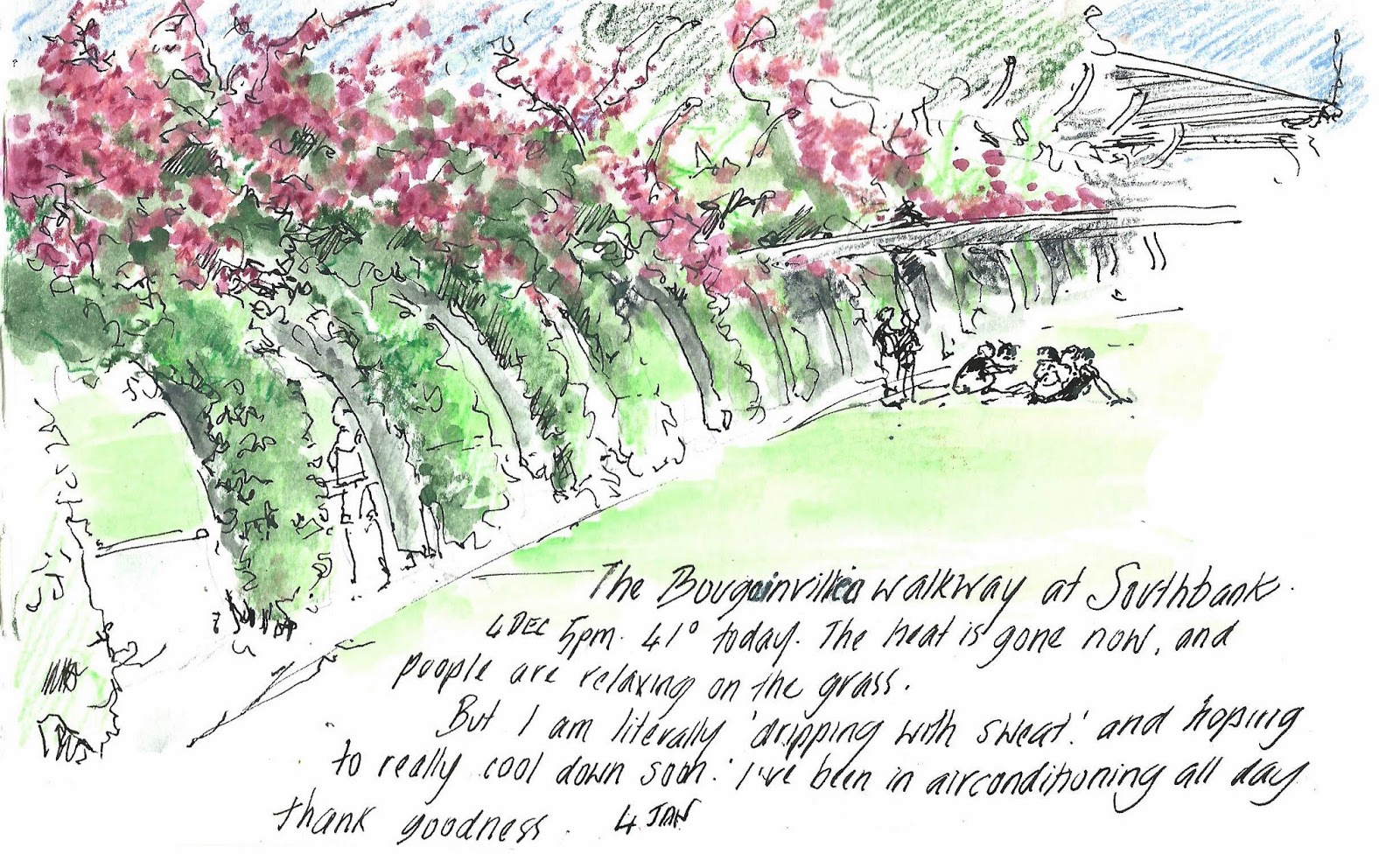 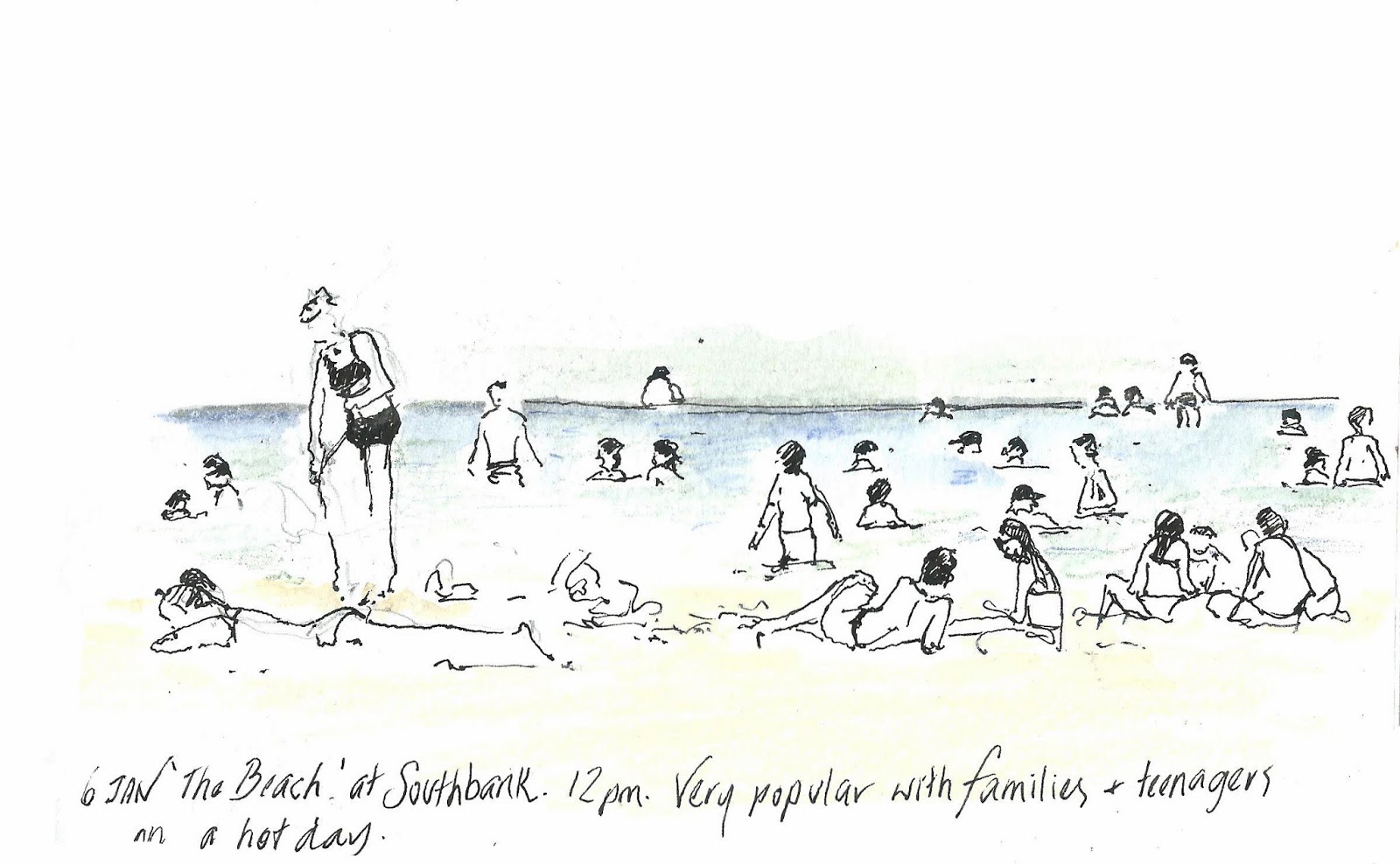 
Newcastle was an organised USK event where Sydney Urban Sketchers visited Newcastle. I have written the day up separately  http://australia.urbansketchers.org/2014/01/newcastle-alissa-duke.html.

It was a wonderful event and so good for many of us to connect with Urban Sketchers we had met online and for the Newcastle sketchers to meet us (and vice versa) and show us their city . Thanks Phil . 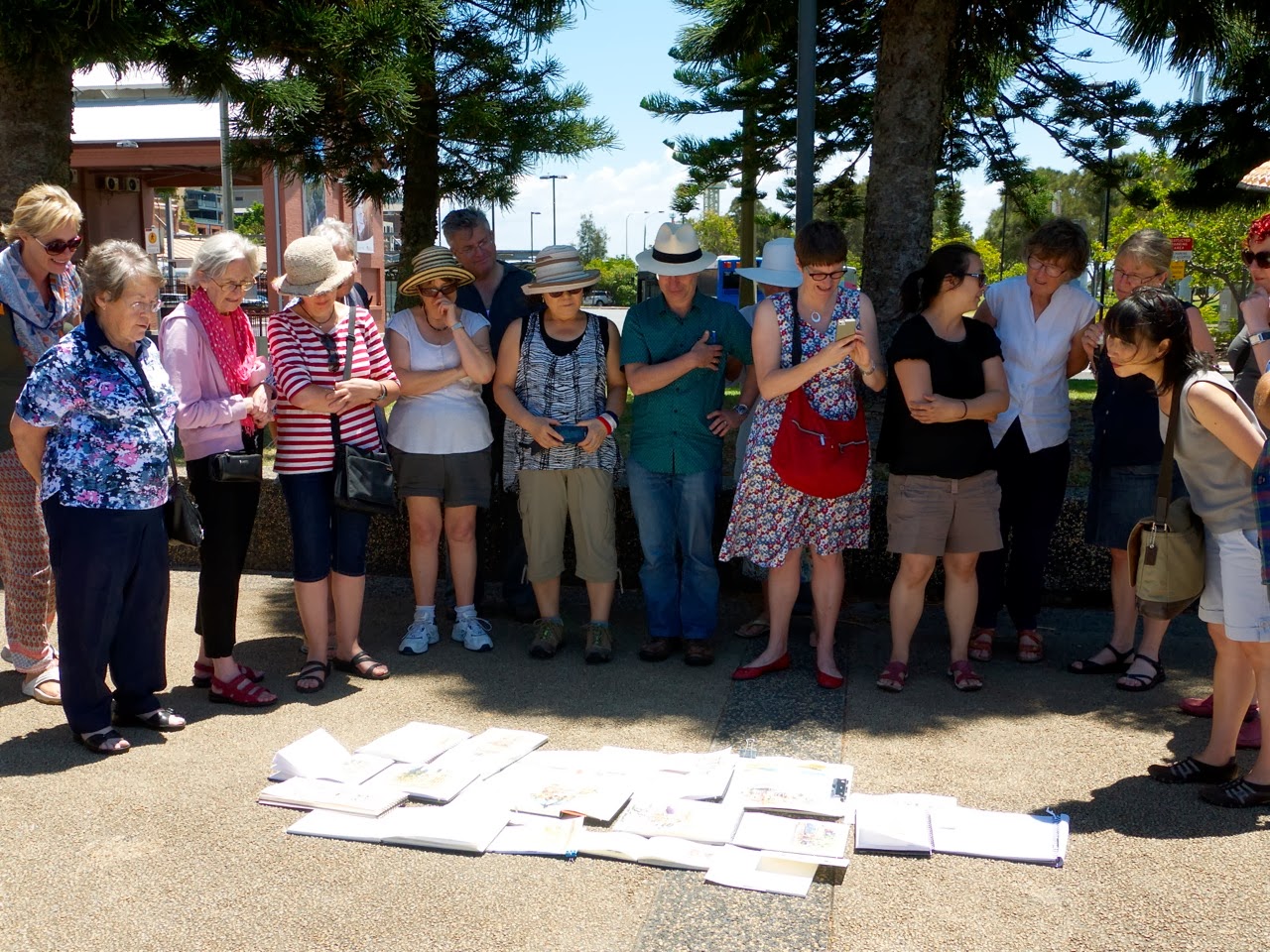 Both of my visits interstate coincided with extreme heat. It was 41 degrees in Brisbane and 44 degrees (for 4 days in a row) in Melbourne. But still we sketched, finding shade in the morning and then air-conditioning. A hardy bunch !

I was in Melbourne for a week and fortunate to have all my days free , so lots of time to line up sketching activities with Urban Sketchers in Melbourne.  Kym, Evelyn and Angela - combinations of the three, and others as well. I had met them two or three times before, so it is like meeting up with friends (which is actually what it is). We took every opportunity to meet and sketch: before they started work (a 7am start one morning!) their lunch hours and any other time. My visit also coincided with another Sydney sketcher travelling. Chantal was in Melbourne and visiting her sister Suzette. We had a morning with them too.

Sketching with Kym before she started work. The staff at The Quarter on Degraves Street  took our photo and put it on instagram. We received lovely reactions and had some great conversations everywhere we sketched. In most cases cafe staff love it when you sketch their food, cafe or coffee. I think that it is because you are taking the time to appreciate on paper the food they have taken time to prepare and look at it in a way that other people do not. 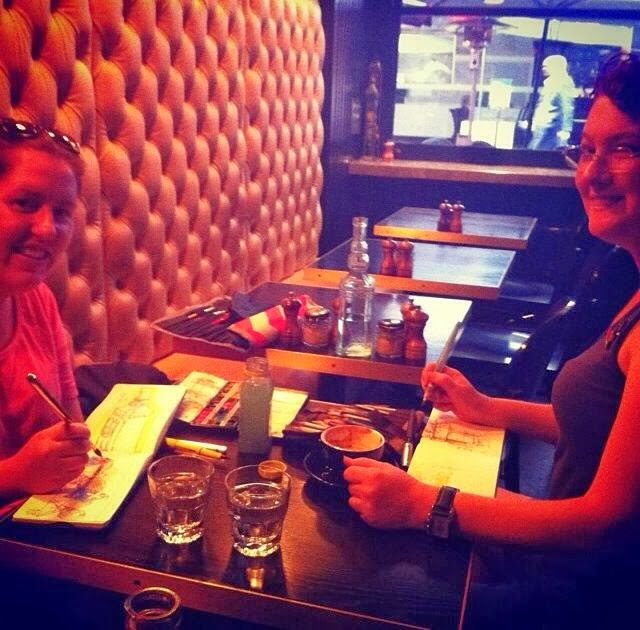 
DAY 2
With Chantal, Suzette, Evelyn at Koko Black cafe where they let us sit all morning and gave us a sample of chocolate 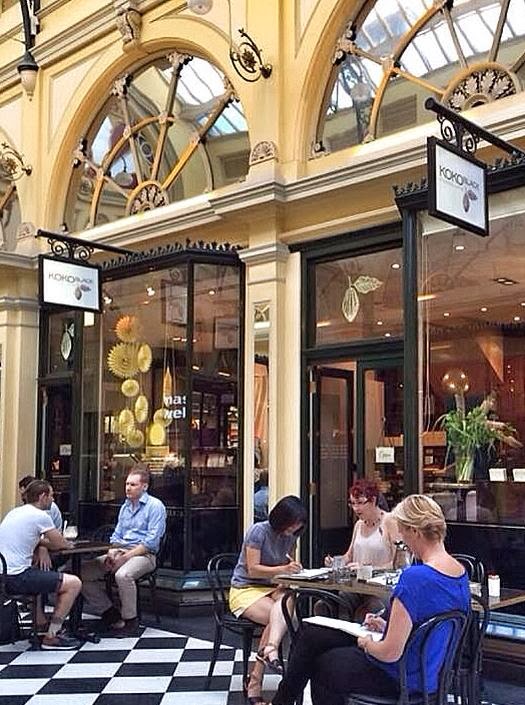 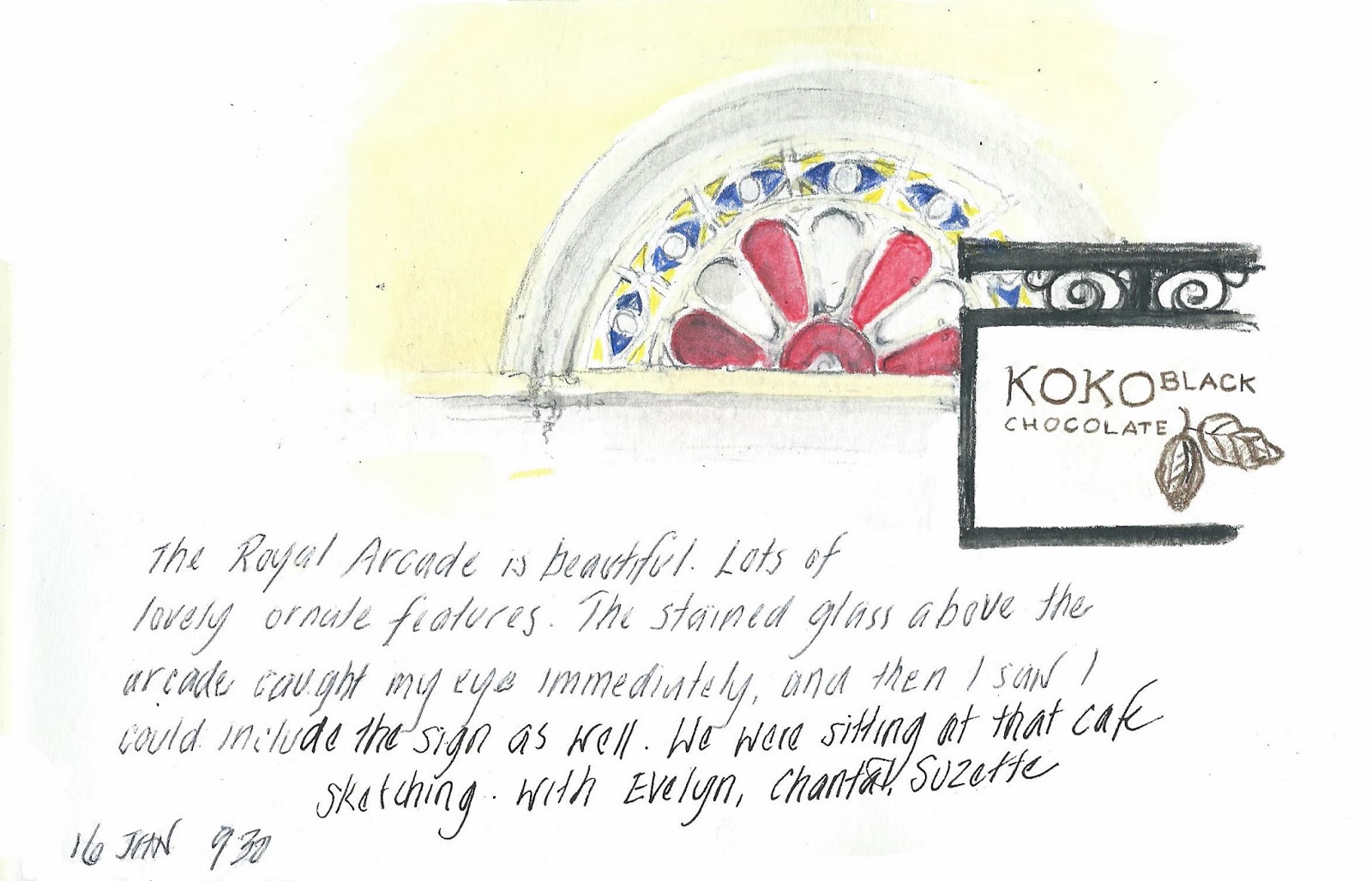 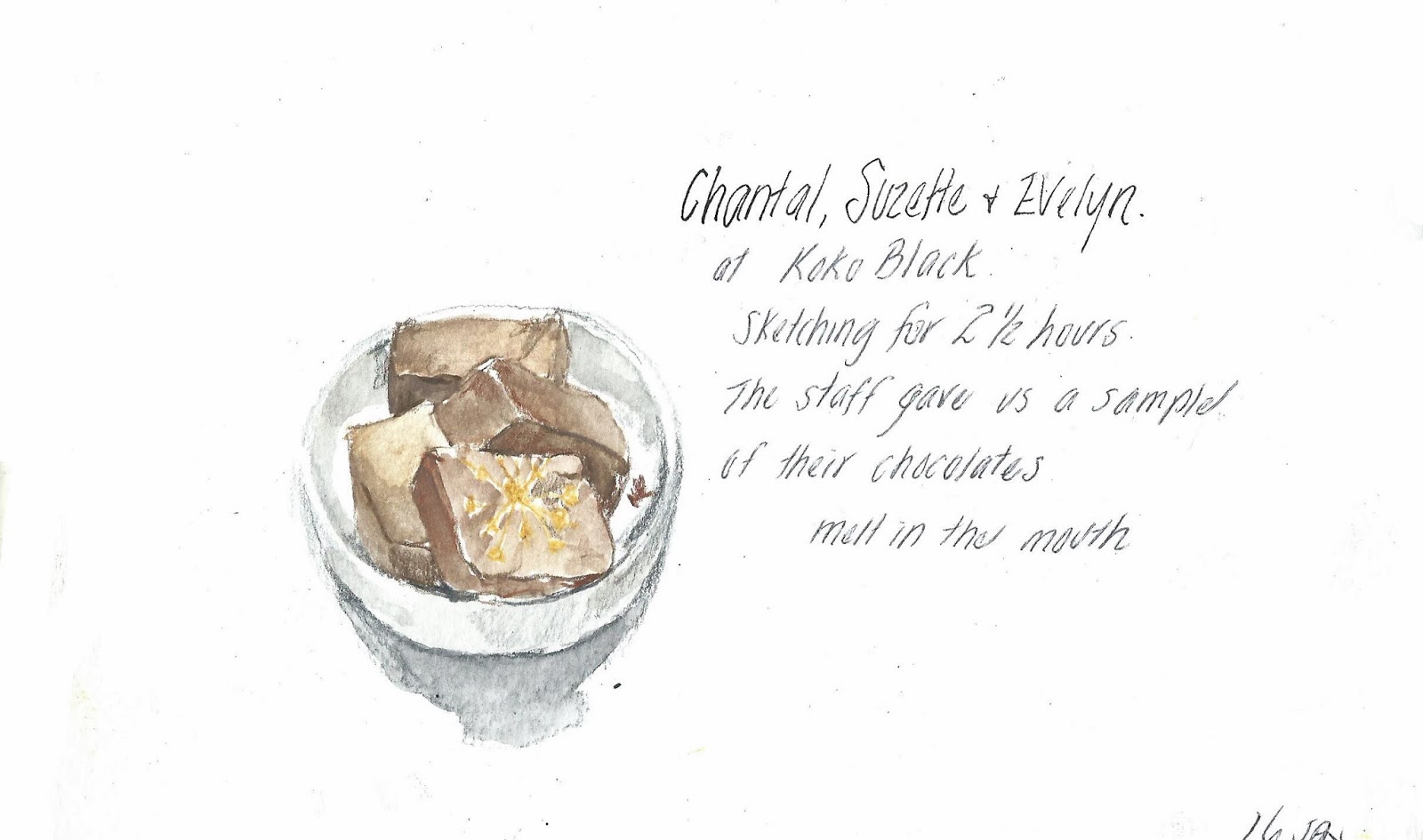 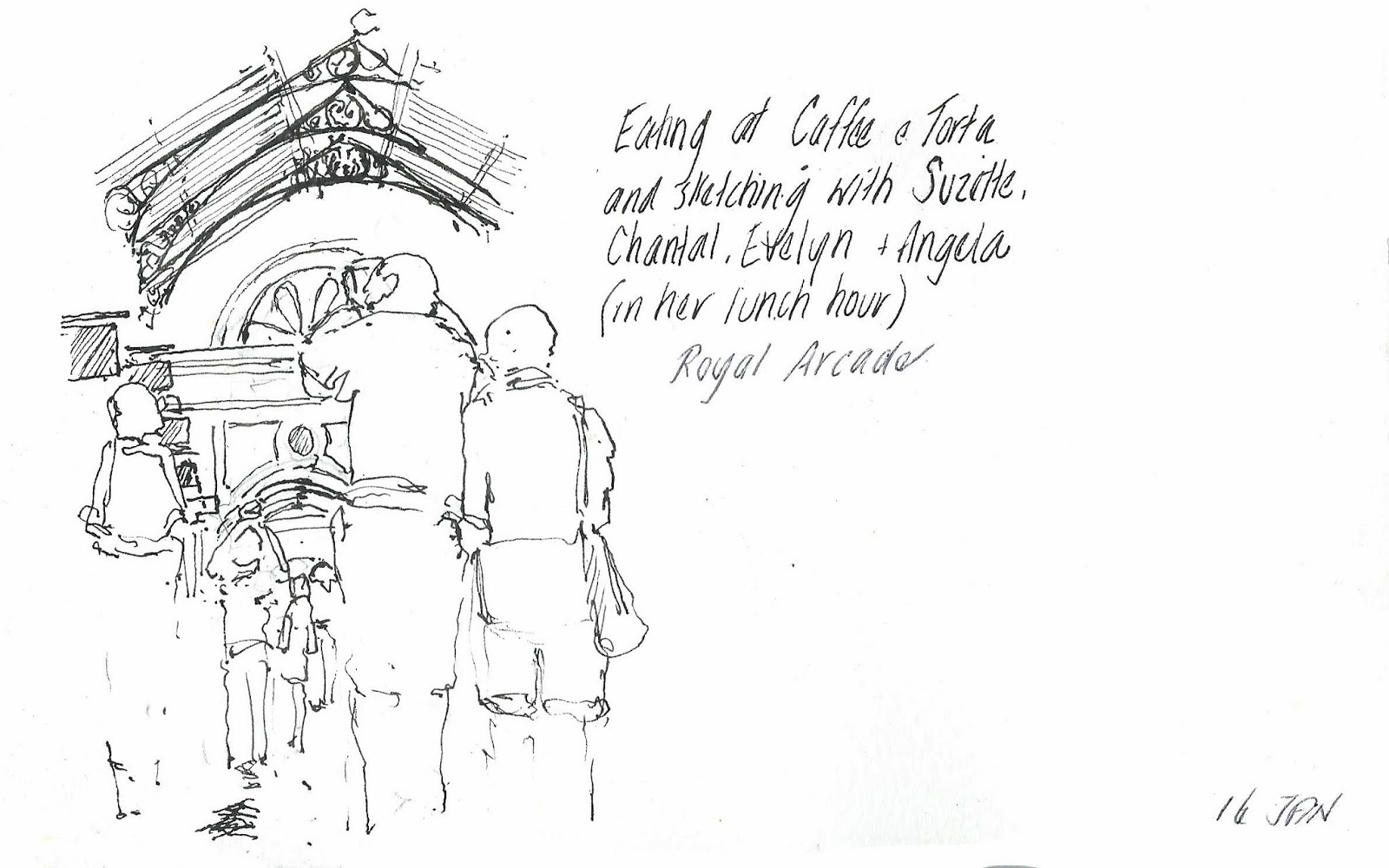 After farewelling Suzette and Chantal, Evelyn and Angela and I ventured outside into the heat.The joy of sketching with locals is they can suggest places to sketch and it is often an opportunity for them to sketch something that they have been meaning to do for ages. They took me to Town Hall. There are a number of pianos in public spaces called "Play Me I'm Yours" - which is what it is. A piano is there (all painted colourfully).  You can sit and play them. I do not play, so sketched them !

The earliest start 7am, for a prework sketch with Kim & Angela in one of Melbourne's laneway cafes. Plenty of time for continuing conversations that we had started the day before !


Then moving onto a tearoom that Angela had wanted to sketch. We sat outside looking in
﻿


My final sketch with a Melbourne sketcher was as Evelyn & I sat on the steps of the Parliament of Victoria. She sketched the panoramic view and is determined to bring the Urban Sketchers group here. I sketched the building for another project I am working on (which is another blogpost on another day) . We were sketching when a camera crew and others came out and were interviewing a politician/spokesman from Emergency Services about the ambulances coping with the demands in the extreme heat. So I sketched them !﻿ 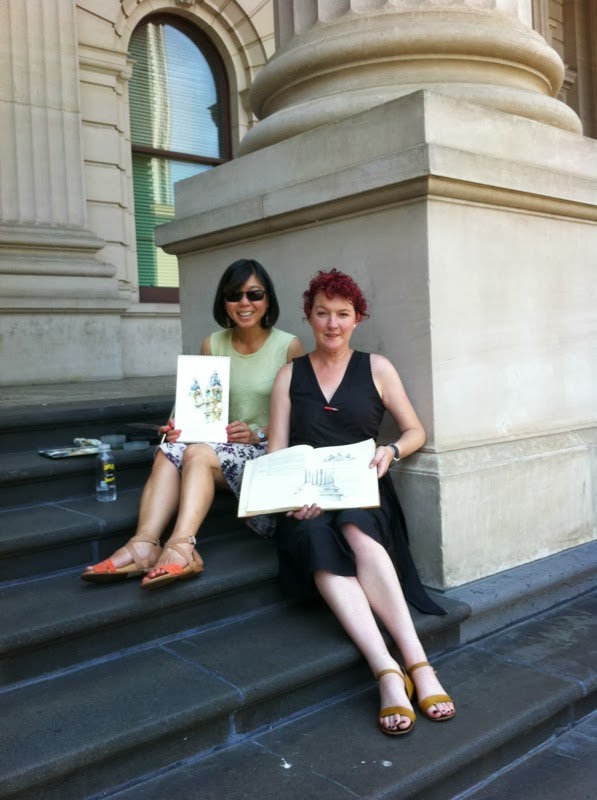 Posted by alissaduke at 7:24 PM