The Jacarandas are blooming in Brisbane City.

Brisbane is looking incredibly beautiful right now with her purple carpet of flowers on the trees and on the ground.  It is an amazing sight.

The Brisbane urban Sketchers have been taking advantage of this and sketching in places where the jacarandas are at their best.  New farm park, UQ St Lucia and Saturday we sketched Dockside.

Before British settlement, Kangaroo Point was occupied by the Turrbal people.  It is one of the earliest suburbs settled in Brisbane and subsequently, is one of Brisbane's oldest suburbs, rich in history and character. It had a reputation for violent and rowdy street gangs around the 1900s, with a number of street riots, even a murder. (Read the Mayne Inheritance) 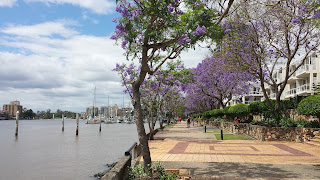 I am sitting with my back to the Iconic Story Bridge looking down the Heritage Walk to the Dockside Ferry Terminal. 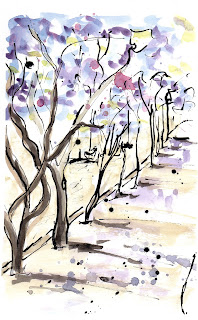 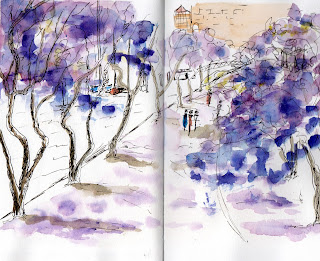 During Brisbane's convict era stone was quarried at Kangaroo Point for building works in the town across the river. By 1837 parts of Kangaroo Point were being farmed.
In 1844 the first of several public houses in Kangaroo Point, the Bush Inn, was licensed.
By the late 1850s it is estimated that Kangaroo Point had about 80 houses, a wharf, a ferry service to north Brisbane, a bone shed, the remains of a derelict boiling-down works dating from the 1840s, a sawmill, a brick-works, and a postal receiving box. The industrial potential of Kangaroo Point, particularly along its shoreline, was becoming evident, and all the land had been sold by 1854. 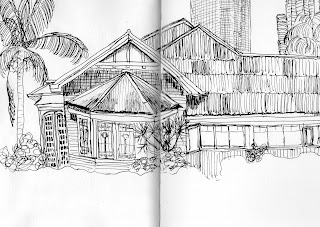 Main Street ran from the tip of Kangaroo Point southward to the Woolloongabba Five Ways. It was flanked by sawmills, tradespeople, cottages, a few larger houses, the Kangaroo Point and Pineapple Hotels, an immigration depot at Wharf Street, the primary school and St Mary's church. Slipways and engineering works were large employers. 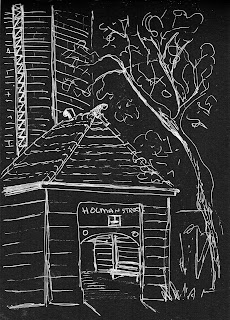 The Holman Street Ferry Terminal was built prior to 1919 for the City of Brisbane, then responsible for the servicing of ferry routes across the Brisbane River.

CT White and James Warner Parks at Kangaroo Point were once the home and workplace of some of Queensland's pioneering scientists and researchers.  There is now a Natural History Trail here in their honour.  I can't wait to go back witht he group to explore and sketch more wonders.