Hi, Frieneds, did you have a nice weekend?
On Sunday, we, Sydney sketch club members enjoyed sketching at Macleay Museum in Sydney University. It's a museum of natural history, ethnography and history.
Let's enjoy a time travel from 18th C and from a micro to macro world. Indeed, the biiiiig bones welcome you at the entrance. Manmos? No, an elephant. Ohh...huge! 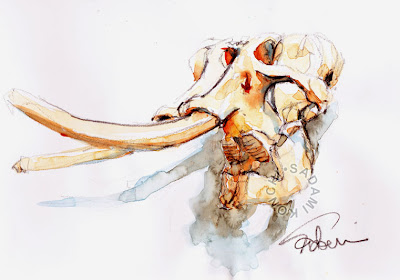 Regarding nature, the museum has more than half a million insect specimens in the collection. Wow...!! A wide range of collections impressed me so much. Pioneers' passion and enthusiasm for study also touched me. The display showed used devices, too. 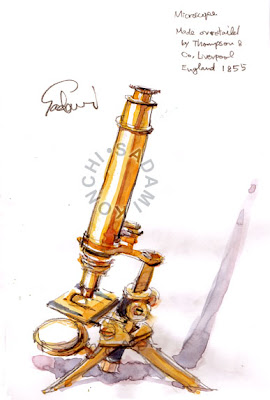 However, the Macleay Museum is often overlooked by visitors. I have to confess I did not realize it and only know Nicholson museum till today. A bit shame, the Nicholson Museum seems to to be very popular. I wonder if the Macleay museum has got enough budget to maintain the collection. I saw one insect collection being damaged. Hopefully, more public attention and a financial support will come to this historical and precious Macleay museum. 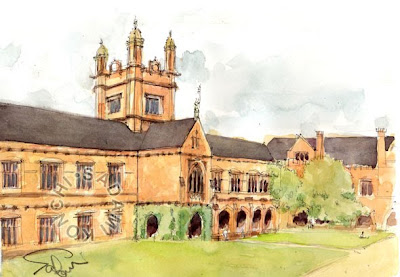 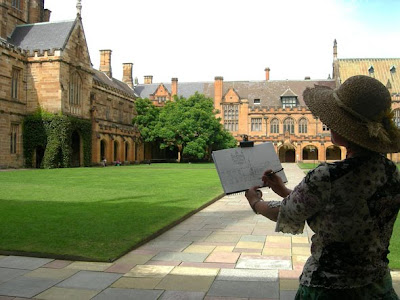 In respect of ethnography, more importantly, the Macleay museum has a great collection of Aboriginal people's culture and life. An amazing number of photographs are there. So, researchers and professors still visit here for study. I had a fun in finding a historical Japanese new year greeting card and Japanese old fashioned geta(="wooden sandals") in display. 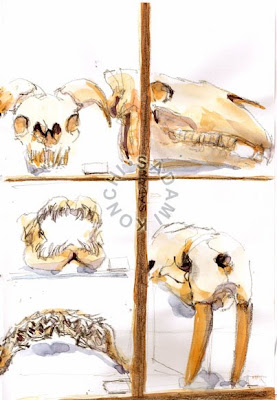 (*Can you guess what animals are they?)
But some collections in ethnography surprised me such as an ornament made of human teeth. Another historical one is human foot bones used for an educational purpose. (*I did not sketch them all...a bit scary at night?!)

Imagine. Once upon a time, no internet, no DVD, no computer! Certainly, lecturers and scientists have used these collections for education, research and study. These influential data has contributed to the development of science, anthropology and so on, even though today, internet and computers are taking over some part of the museum. I sincerely hope we can maintain this museum for the future.

Apart from the serious stuff above, sketching was really a fun. 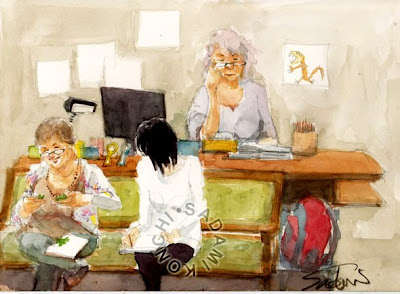 Very dim and dark. One friend had to "keep dancing" on a floor in order to get light. Why? A light sensor turns off every several minute. Oh, poor girl, but we giggled. Other friends said, "feel a bit headache" from too much concentration. But Friends, you know, I sketched Chinese First Emperor at NSW Art Gallery nearly in the darkness. So, the Macleay was quite kind to me.

Well, I whispered to other club members... one day... after the explosion of nuclear power plants...
humans are in a window and cockroaches look at display.
Of course, the friends burst into laughter!!!

But Friends, this is a scientific joke. According to a biological research data, cockroaches would survive radiation exposure.
"Sadami, they don't understand literature."
"Well, after the nuclear exposure, they will achieve a miraculous evolution--get a great brain! That needs education for kids, too. Excursion for Macleay Museum."
"Hahahahaha!!!" we laughed, but...hopefully, it will never happen on homo sapience in the future.
Anyway, have a wonderful week and happy painting!! 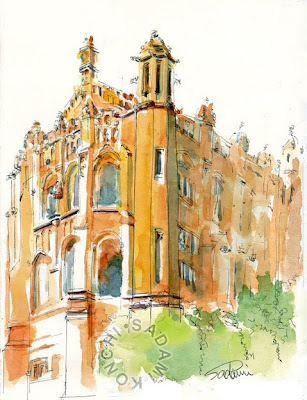