Urban sketching in May 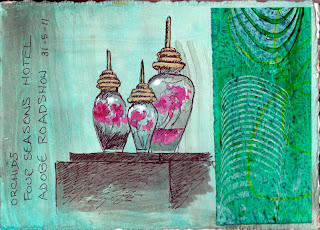 The whole of May was taken up with Every Day in May, for me. That was mostly sketching objects around the house. However, last week I went to the Adobe Roadshow to catch up on the latest from Adobe (CS5.5). It was held in the Four Seasons Hotel, and there were hundreds of attendees. I took a chance of a break in the rain & left early & registered early. I sat in the lobby to sketch, but didn't dare attempt anything too time-consuming because as soon as the door opened, there was a stampede. There were groups of these jars filled with orchids all around the lobby.
Posted by quirkyartist at 10:28 AM