Last week we went to the Powerhouse Museum again. I particularly wanted to draw something from their special ‘lace’ exhibition on at the moment. It was pretty dark in there and I wanted to keep out of people's way, so I sat back against the wall on my little folding stool. I decided to draw the amazing shadows that were being cast on both the floor and the walls by this exhibit called “Spider Lace”. While I was drawing people were walking through the exhibition and stopping to read the information about the lace exhibits. Their shadows were being cast on the wall among the shadows I was drawing, so in the end I scribbled them in quickly before they moved on. 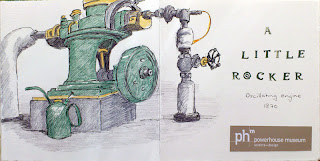 Then I went to my favourite part of the museum to draw yet another little machine. "Little Rocker" was named by the museum, not by me. It's an oscillating machine. Not sure what it does, but it's a steam machine. They seem to be used for health & fitness these days, but not this little number, I think.

Posted by quirkyartist at 5:26 PM