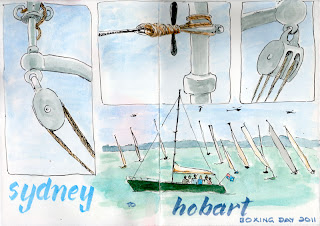 On Boxing Day, this is what most people in Sydney do - they either go out on the harbour to watch the start of the race, or they lay back in front of the tv and watch the race. This is the first time I've been out on the harbour to see it for years. Now, I belong to the Heritage Fleet which owns some wonderful old vessels restored and crewed by volunteers. I've been out a few times with them lately and although it wasn't sunny, it wasn't too breezy so the sketchbook wasn't flopping about too much.

I went out on the gentleman's schooner 'Boomerang', which, though it doesn't have sails any more, is a beautifully elegant ship. You can read more about it and see drawings from my November sail here. The sea was a little bumpy, but only a problem when drawing the straight lines around the boxes. I could have even put the colour on, but I was sitting next to a very nice lady in extremely pristine white linen, so I didn't dare get the paints out. (Imagine!)

There were many more yachts of course. The newspaper said that the sea was like a washing machine. We counted 13 helicopters, but I only drew four.
Posted by quirkyartist at 1:37 PM