The International Fleet Review began today in Sydney. Approximately 40 warships from the Royal Australian Navy and navies from around the world as well as up to 16 tall ships are expected to attend. They will be joined by over 60 military, civilian and heritage aircraft as well as more than 10 military bands. 8,000 Australian and foreign naval personnel will be in Sydney for the event.

I am fortunate to live near the National Maritime Museum, where the tall ships gathered before the events and two Navy ships are berthed.  So I have been presented with many opportunities to sketch, just on my way to and from work. All sketched with Lamy Safari Joy pen. 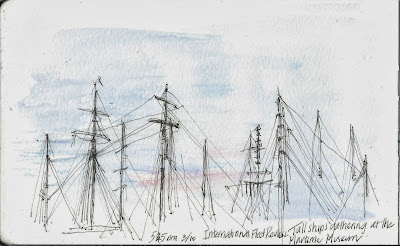 Thursday 3rd Oct . 5.30pm
I sketched the masts of some of the tall ships as I walked across Pyrmont Bridge. I am fascinated by the spiderweb-like images that the rigging reminds me of. I was not interested in drawing the rest of the ship. And this was only supposed to be a quick sketch. 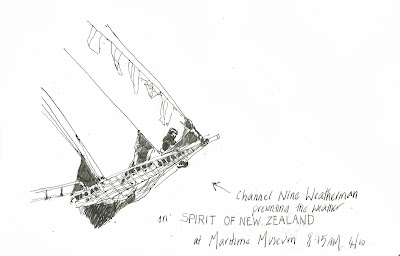 Friday 4th October 8.155 am.
I walked down through the docks where the tall ships are. There were quite a few people about and television crews too. I was drawing the black sails of Spirit Of New Zealand when a person appeared and sat on the end of the bow (?) and started presenting the weather for a tv station, so I added him in too. 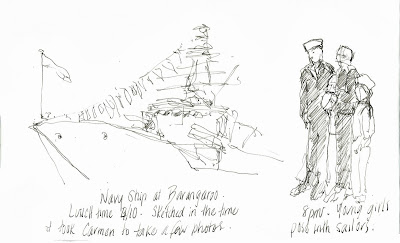 Friday Lunch time - after lunch my work colleague & I stopped by to look at the Navy ship. While she took a few photos, I did a quick sketch, We both captured the moment in the way we wanted too.
8pm - the Navy is in town. Young girls (and their mothers) pose for photos  with the sailors, wearing the sailors' caps.

If I do not see anything else of the Fleet Review, I am happy with this
Posted by alissaduke at 9:14 PM