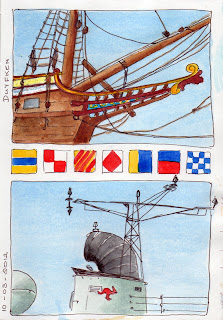 Last Saturday I took my sketching class to the National Maritime Museum at Darling Harbour. It was a beautiful day so we were able to sit outside and draw the vessels. As you see I've put the blue sky in - we've had so many rainy days that when it is a sunny day I feel that I have to emphasise that in my sketches.

The sketch at the top is the stern of Duyfken, a beautiful replica ship. The original sailed from Indonesia in 1606 to Papua New Guinea and came across Australia. It is a full size replica, but a small ship compared to other sailing ships such as the James Craig which I sailed on just before Christmas.

The flags spell out the word DUYFKEN. The Maritime Museum often use ships flags to label things such as WORKSHOP. Much more colourful and exciting, don't you think?

The funnel in the sketch below is from the HMAS Vampire. It has a Qantas flying kangaroo on there. I'm wondering if Qantas is a sponsor of the museum. If not, why? Adds a nice touch of colour anyway.
Posted by quirkyartist at 6:43 PM