Hi, Friends, did you enjoy a weekend?
I enjoyed sketching "Sydney International Open Chess Tournament" held from 10-15 April in Parramatta Town Hall. The sketches were done by the courtesy of Mr Shane Burgess, vice president of NSW Chess Association. 66 players had battled everyday from morning to evening for prizes.
Friends, shhhh, later, I'll tell you how to beat an opponent with "tricks."ʚ(ˆ◡ˆ)ɞ 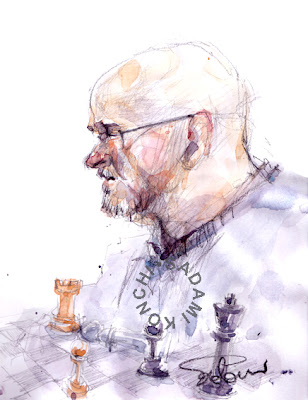 My first impression. A player's concentration was astonishing. Crashing an opponent is an ultimate goal in a tournament. Huge pressures are on players. In high tension, each player's body language told me very well about what was going on and who was a winner or a loser. I was quite empathic for a loser. 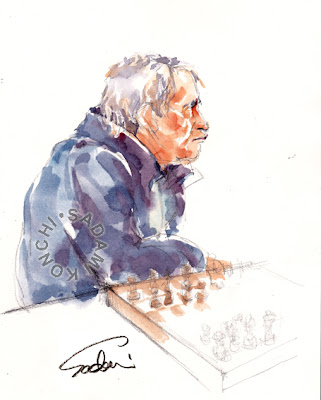 But a player told me, "No! Body language does not always match a player's thinking. Chess is much like a poker." Then, the giggling female player whispered me two tricks.

Trick1 : Pretending! A player pretends perfectly ok at a bad movement and puts pressures on an opponent. Or a reverse, "smokescreen," a player pretends as if he has made a great mistake, in fact, a very clever movement. Or another player always keeps "smiling" in any context.
Oh, I see! Chess certainly is a psychological game! 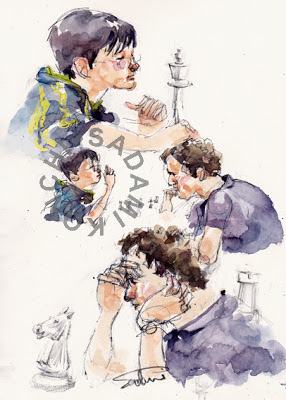 Trick 2 : Maximize What You Have?!
Another trick I heard was, a woman's "sexuality show-off," = put on a very pretty and low cut shirt to show your "milk-tanks." It distracts a male player. Male players told me, "And they (=women) lean forward, while they are struggling. Once, they feel they can win, then, they will not show it any more!"  Players and I chuckled together!
Friends, if you play chess with a male friend next time, go for it. You may beat him, "Checkmate, daarrrling"?! ʚ(ˆ◡ˆ)ɞ Or, gentlemen, when you play chess with women, look at a flat chess board, not at "two mountains." Otherwise, you'll be led into a death valley. 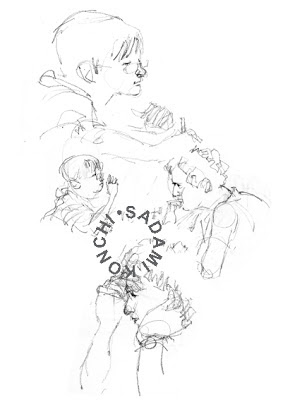 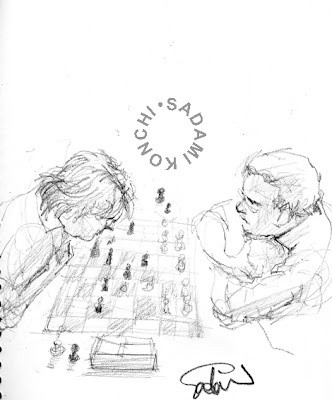 Ultimately, chess is interactions between two people. After the game, both sides shook hands and smiled at each other, which touched me, too. Wonderful! Players know very well each other. The tournament is a "chess lovers community" and "socialisation."
It was so lovely to make friends with chess players, who respect a visual artist. Finally, I'd say special thanks for Mr Burgess and his staff or backstage players who organised the event. You're great!!
(*Three other chess players sketches are available at my blog, "Sadami's Graffiti.") 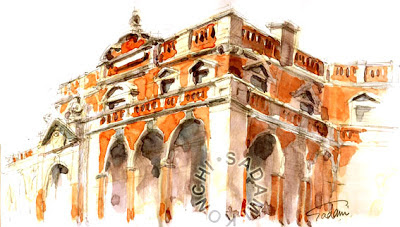