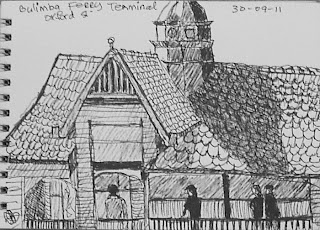 Today I had lunch here.  A delicious meal of fish and chips and armed with my sketchbook, I was set for a couple of hours.
The Bulimba ferry terminal was built in 1922 for the Balmoral Shire Council, then responsible for the efficient servicing of several ferry routes across the Brisbane River. Since the days of the convict settlement at Moreton Bay when a punt was poled between the main settlement and the south bank of the river, ferries have been a vital transport facility for Brisbane. The river twists and loops through the city and cross-river access is important in linking city and suburbs and greatly reducing travel time between them. Although the first bridge linked the city and South Brisbane in 1862, no other bridges were built for many years, public transport was limited and few people had private transport until after World War Two. People who needed to commute to work and to access shopping and entertainment facilities used cross-river ferries on a daily basis. Ferries were the only major transport service provided by metropolitan local authorities as responsibility for care and management had been placed in their hands by an 1858 Act.
Posted by JJ at 8:39 PM