Today I realised I had been doing a lot of drawing recently, but not so much sketching. I knew I was going into the city yesterday evening, so I browsed through The Art of Urban Sketching to get me in the mood for sketching around the Opera House. I had planned to draw the lights of VIVID , where lights are projected on some iconic buildings around the Harbour. But is was so very wet that I decided that as I had seen the light display a few nights ago, I would not make my self uncomfortable in the wet and cold,. So I went towards the Opera House and sketched around there in the shelter and warmth.
I walked past a busker who had gathered a large crowd, He was up on a platform,  juggling fire. 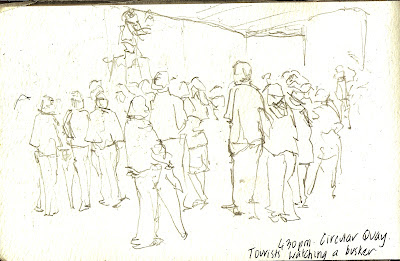 Then I tried to capture the greyness of the day. This is when I realised how damp the day was. None of my pencils would take to the Moleskine watercolour page – it was not wet, but sodden with atmosphere. 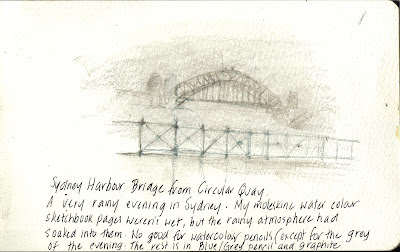 I walked up to the Opera House forecourt, which was deserted due to the weather. Everyone was in the undercover cafes and bars. I did one or two quick sketches before going inside to see ChorusOz perform Carmen. Some of my friends were in the chorus 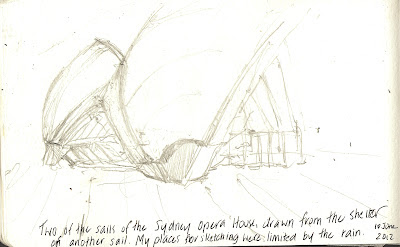 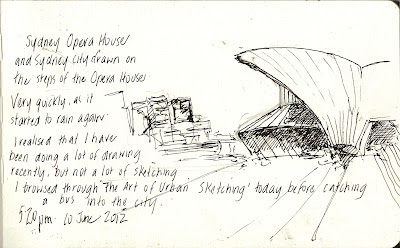 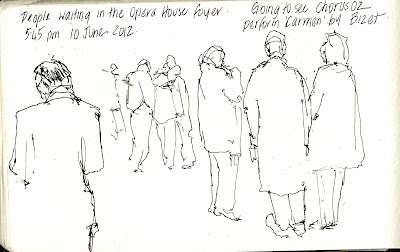 I had thought about sketching during the concert. The lights were still on, so I could see my sketchbook and I had figured out what I what sketch. However the seats are so close that I did not feel comfortable taking out my sketchbook. So I I waited until the performace was over and quickly sketched a small section of what I could see as people started to leave 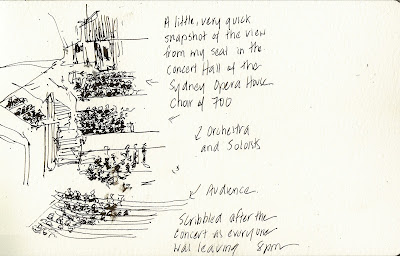 Posted by alissaduke at 3:46 AM