Work has been frantic lately and I realised I have all these one off sketches I have done over the last month and not uploaded them to anything. They are all disconnected from each other but worth sharing.

Still thinking about my architectural struggles, I took my sketchbook with me on a grocery run and stopped at a local park to draw the aquatic centre. I spent a few minutes studying the scene before launching into it, reading the patterns, etc. It worked out okay but it is very clinical and lacks a lot of character. 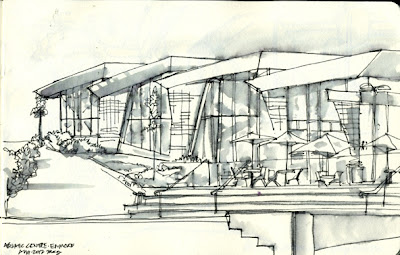 Catching a bus all the way from town in peak hour on a rainy day can be a very long journey. Initially I was going to draw whatever I could see out my window whenever the bus stopped, but as the bus filled up that became more interesting.

Met up with a few other Urban Sketchers on the nastiest last night in winter, what a performance Mother Nature put on. We found some refuge on the ferry pier, and I found the rain splattered windows looking out across to the Opera House really exciting. It was like an Impressionist's painting because it was softening the definition of the scene. 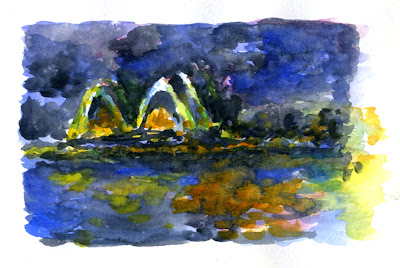 The first Sunday in Spring was too good to stay indoors, so I headed out for a few quick sketches. I had thought some more about my architectural studies and wanted to practice another approach. I hate putting in pencil lines but obviously the benefit of that is everything is in proportion and it all fits on the page. To avoid that I decided to paint very faint gestural strokes enough to give me some guidance. It seemed to work quite well, and by doing that it also took the pressure off "will it fit? have I left enough room?" and can now enjoy the sketch more thoroughly. 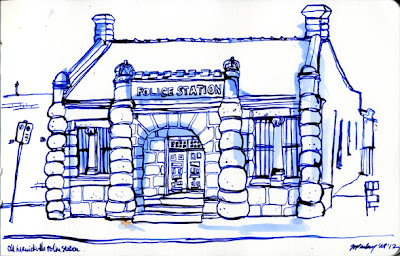 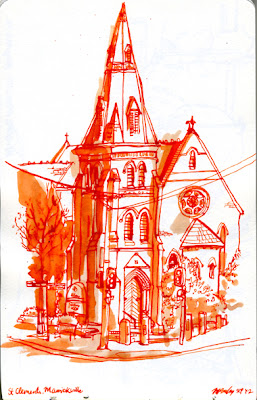 I did a two stage breakdown of another building (from a photo) on my blog if anyone would like to see it.