Urban Sketching at Pyrmont in my new Sketchbook 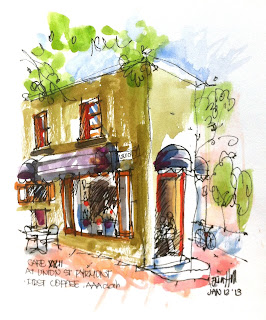 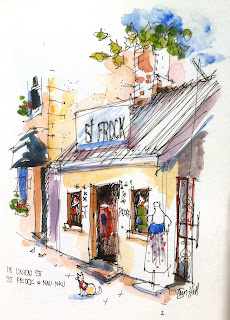 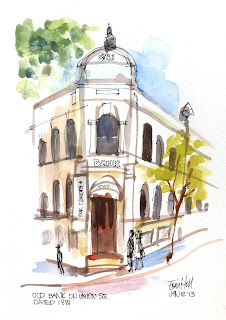 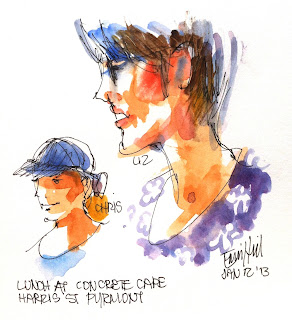 Liz had given me a beautiful 150gsm Stillman & Birn Sketchbook, as a sample to see whether I could bear to part from my usual ringbound 110gsm one!
With that, I was to get myself to Urban Sketchers and to post more. OMG yes if that is my carrot.

So with the threat of 40+ degrees I had to show what I was made of.

Thankfully the scorcher didn't arrive on Union Square, Pyrmont. Instead a comfortable 25 or so.
However I needed a good coffee to get the pen flexed, so popped along to Cafe XX11 down on the corner of Union Square. Worked my way through a rustic collection of old rooms to the counter, ordered, and waited outside to pickup, and decided the whole building was way too cute not to sketch.

Left the first page blank - maybe a title to come - and began with my No8 Artline pen.  Mmmnn not happy Jan. Is it running out? Well let's just tilt it up and get the best out of it. Sketching's like that. You darn well keep going. Who knows. Could be the best one ever when you check later!

Mixed some washy colours in the lid and slopped around a bit seeing what happened. yes it's alright.

Next up Union St was little Neu-neu the dog. Little thing wearing a pink harness. Then she was gone. Began with a No2 pen, sketching the simple structure, surrounded by taller buildings of sandstone with wood and iron, details of iron railings and window boxes. The pretty plane tree leaves hovered above like a little Parisian scene. Time to put everything away and go. But no, out comes Neu-neu and poses in front. Quick grab the pen and go go go. Actually looks like her!

Finally while on Union St, the bank across the way. Several others did some lovely ones of this, but I was keen to try watercolour first and line after. Seemed to work quite well. By keeping it pretty simple I felt it didn't need all the details as they'd be understood by what I left out. All done with a little brush in my Cotman's mini watercolour set, but used on it's side. You get a lot of coverage that way and no changing brushes, Then a few scribbles with the No 2 pen and go catchup with the others.

Loved the exchange of ideas and techniques we had. You can't believe the intense conversations that come about when discussing wax pencils, sable brushes, this pen or that. It's everything. It makes our world go round.
And my new book. I think it likes me.

www.erinhillmyblog.com
Posted by Erin at 10:07 PM